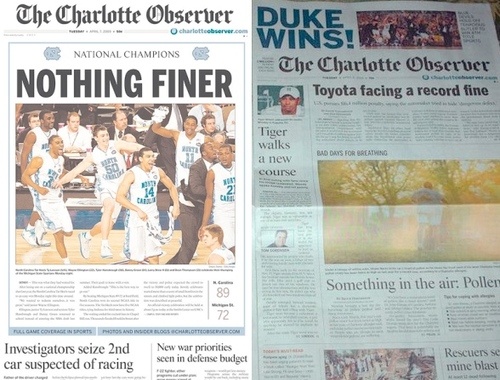 This is a little comparison of the Charlotte Observer the day after UNC won the 2009 NCAA title vs yesterday. UNC enjoyed a giant splash on the front page whereas with Duke you were referred to the sports section. The Greensboro News & Record went pretty much the same route and even offered an explanation. As John Henson would say it is all about the scrilla and getting said scrilla from advertisers or straight-up sales of papers from the news stands. That is always going to be better with UNC than it is with Duke. I would venture to say that NCSU winning a title would sell more papers than Duke as well. Why? Because of the actual number of UNC or NCSU fans vs Duke fans in the great state of North Carolina. There are far more fans of the two largest public schools than Duke so it stands to reason the money would be better if the former wins. Chances are more papers were sold last year vs this year. I bought one because I wanted it for a keepsake and I imagine the same is true for other fans as well. More fans means a more keepsake seekers who are willing to pick up a newspaper they normally would not buy.

For the record, the News & Observer in Raleigh likely did much the same for both, then again they are the paper of record for each school. The only oddity there, where the Charlotte Observer is concerned, lies in the fact the same company owns both the CO and the N&O.

Side note: You are all darn impressed I worked scrilla into this post aren't you?