Alternate headline: "It's Morning in Raleigh..."

If you have paid any attention to local sports news around here in the past 48 hours, you know that NC State has decided to part ways with AD Lee Fowler after 10 years during which not much got done, at least not much that Fowler himself can solely take credit for. As someone who regularly interacts with NCSU fans I can tell you most of them are thrilled beyond words. However, if you want to really be entertained head on over to PackPride.com and read all about how someone's eight month old daughter will be able to grow up a proud Wolfpacker now or something.

With Fowler heading out the door by the end  of June two questions arise: Why and what now? First let's tackle the why. Best as I understand the situation, Fowler was largely seen as an underqualified buffoon. Well, maybe that is a bit harsh, but words like "incompetent" were routinely tossed around where Fowler was concerned. The issues boiled down to poor overall athletic performance(NCSU is routinely at the bottom among BCS schools in the Director's Cup; UNC by contrast is usually near the top.) There are questions about how the PR is handled in Raleigh and plenty of venom is spewed the general direction of SID Annabelle Meyers. Fowler has shown himself to be antagonistic to the fan base. On occasion he has publicly stated that expecting to compete with UNC or Duke was not a reality. Beyond that, the way the search for Herb Sendek's replacement was handled sticks in the craw of many Pack fans though I am not sure it was necessarily any worse than the way Dick Baddour handled the Matt Doherty hire. Which brings me around to an interesting point.

There was a juncture this decade where you would be hard pressed to differentiate between Fowler and Baddour when it came to hires for the two major revenue sports. Baddour did not handle Carl Torbush in the right way then after firing him twice(or was it three times?) panicked and hired The Coach Who Shall Not Be Named who also got fired before Butch Davis came along. The situation surrounding the Doherty hire was probably more the fault of Roy Williams than Baddour but the manner in which the search extended after Roy opted to stay at Kansas culminating in the hiring of someone with one year of major college head coaching experience created a craptastic next few years.  Still, whether by design or fluke, Baddour has corrected both of those situations. You can argue Roy bailed Baddour out of another embarrassing search by saying yes the 2nd time. As for Butch Davis, it would seem other folks get more credit for that than Baddour, search guru Chuck Neinas among them. However in the case of Davis, Baddour knew enough to get out of the way(or was told to get out of the way) which has to count for something(maybe not.)

Fowler's trip was much the same and you can certainly argue that with Sidney Lowe securing the #5 class in the nation for the upcoming season and Tom O'Brien nudging football in the right direction that the two biggest revenue sports at NCSU are taken care of at least for one more year. The difference between Baddour and Fowler comes in overall performance of the athletic department as well as the general way UNC is seen by the public vs NCSU. Of course winning cures everything and two national titles in basketball, titles in other sports, the baseball team in four straight College World Series, women's basketball being fairly consistent(until this season) and football on the rise makes the PR game easier to play.  It also bring in money hand-over-fist and makes Baddour look like a genius. Not that Baddour gets credit for everything that goes well. Certainly basketball success has 95% to do with Roy Williams. Football success is similarly attached to Butch Davis. The expansion of the football facilities and the fact UNC hosted a Thursday night game on ESPN should be credited to Davis much like Chuck Amato gets credit for the facility improvements at NCSU. Where Baddour has done well is playing to his own personal strengths which is really the money side. If I had to speculate I would say Baddour is working as a CEO of UNC athletics which probably means a lot of delegating while overseeing the big picture. I can hardly complain with the results, especially the fact we never hear from Baddour. He largely stands behind the scenes unless he wants to show off his bling. 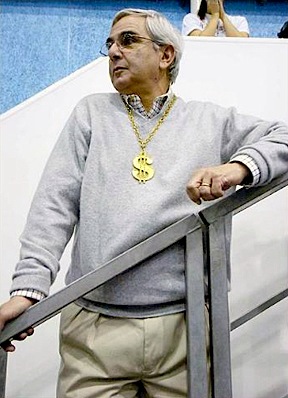 Fowler is seems was quite the opposite in his willingness to be heard and seen while not really producing any results.

The other question for NCSU pertains to where do they go now for athletic department leadership. I honestly have no idea. Why fans can be really upset and want an AD gone, I would venture to say many of them have no ideas about ADs, how the department is run and who would do a great job at it. I know I don't and I have been a part of an athletic department both as a student athlete and a member of the staff. On the surface I would say NCSU's three biggest needs are (1) a vision for achievement at a higher level (2) someone who can handle the coaching staff and (3) someone who can work the PR angles to improve NCSU's image. Fundraising is not an issue, neither are facilities. The former is done quite well by the Wolfpack Club and the latter has been improved upon in the past few years. The other caveat to the "what now?" question is how fans will perceive change and on what timetable. On one hand I am not sure how much the average fan cares about what the AD does. On the other hand, those that do probably should hunker down for a bumpy ride.  It will take time to turn this boat around.

Now the query you have probably been muttering under your breath as you trudged through this rambling mess is "what in the name of John Swofford does any of this have to do with UNC?" Again, who knows? Could this be where NCSU finally wakes up and makes themselves a bigger players vs UNC and Duke? Does Lowe's recruiting class signal the beginning of a sustained run for NCSU hoops? Will NCSU bring in the type of AD who can reap success vs UNC? Good questions all. From UNC's end, all the Heels can do it keep doing what they have been doing which is winning, at everything. Yes there will be some down years here and there but the bottom line is NCSU has to come to where UNC is at and climbing that hill will be tough. UNC's best bet is to stay there.

Besides that with the recent slate of basketball hires in the state one thing is clear. NCSU is surrounded. 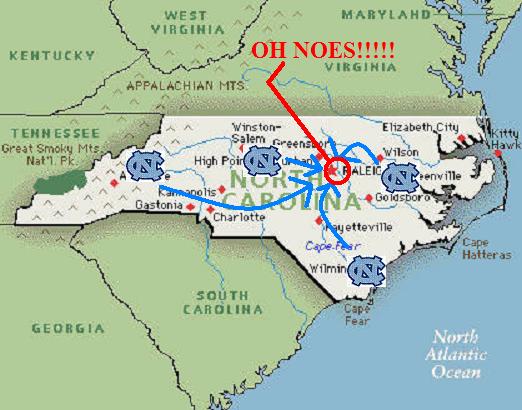