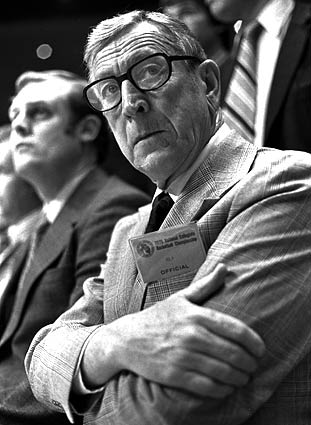 John Wooden in his last season on the bench, 1975.

Legendary UCLA basketball coach John Wooden passed away Friday in Los Angeles at the age of 99.

Known as the "Wizard of Westwood", Wooden established a college basketball dynasty at UCLA in the 1960s and 1970s that I am confident will never be challenged in this lifetime. Wooden's Bruins won 10 national championships in 12 years from 1964-1975, recruiting some of college hoops' biggest stars, such as Bill Walton and Lew Alcindor (later Kareem Abdul-Jabbar) along the way.

UNC and UCLA will be forever linked in basketball lore because the resurgence of Carolina basketball under Dean Smith coincided with the height of the UCLA dominance. Wooden's Bruins beat Smith's Heels for the 1968 national championship, and UNC made the Final Four three other times during the UCLA dynasty. Certainly Wooden and Smith are both on college basketball's Mt. Rushmore.

In retirement, Wooden continued to be an active UCLA basketball supporter and elder statesman of the game. He wrote two books that almost every basketball coach (including me) has on their shelf: They Call Me Coach and Pyramid of Success, as well as lending his knowledge and experience to a number of leadership and inspirational books. Roy Williams also mentions how much Coach Wooden meant to him in Williams' book Hard Work.

Sincerest condolences go to his family and to the UCLA basketball community.