Marvin Austin may have fired off the tweet heard ‘round the college football world, but a review of the cached version of his Twitter account on Google suggests Austin was probably not in Miami at the time of the tweet and lends credence to the notion that Austin was most likely parroting a rap song lyric.

Austin’s famous tweet of "I live in Club Liv so I get the tenant rate…bottles comin’ like it’s a giveaway" has been considered a smoking gun of sorts, suggesting that Austin was living it up in one of Miami’s hottest nightclubs and potentially launching an NCAA investigation that has spread to at least four universities. The time stamp of 3:07AM on Saturday, May 29th seemed to add evidence to the idea that Austin was tweeting a play-by-play of a Memorial Day weekend party. But there’s only one problem – the tweet was not posted at 3:07AM, it was posted at 6:07AM, over one hour after Club Liv closes.

The 3:07AM time stamp has been reported by many media outlets, but since Austin deactivated his Twitter account after the NCAA probe was announced, the only access to his tweets has been through Google’s cached pages. The Twitter time stamps in the Google cache are in Pacific time, meaning 3:07AM is 6:07AM on the east coast. It would have therefore been impossible for Austin to have been tweeting live from the Club at 6:07AM. 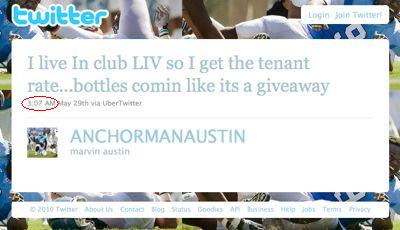 Cached version of Austin's tweet from Google reads 3:07AM - Pacific Time. This image was taken from the N&O's ACC Now blog.

It was actually our friends at State Fans Nation that inadvertently helped shine a light on this subject, as their screen capture shown above of Austin’s tweets shows the 6:07 time stamp. The SFN screen cap also shows the tweets immediately preceding and following the Club Liv post. Two minutes prior to the Club Liv tweet, Austin wrote of how he was going to "bust my ass this summa" to prove he was the best. Fifteen minutes later, he tweets to teammate Gene Robinson that he’s "bout to hop on da bird". A logical guess would be "da bird" refers to an airplane, but that is simply speculation. The point remains that the tweets immediately before and after the Club Liv line do not support the idea that Austin was providing an update from the club.

Also providing context to those three tweets is one Austin posted 65 minutes earlier Saturday morning at 5:02AM, saying he was "up super early for one of my occasional moves". The phrase "up super early" would seem to imply beginning a day, not ending one. Plus, the fact that it comes over an hour before the Club Liv tweet again suggests that he was not out clubbing when he made the posts to Twitter.

In addition, Austin’s tweets give clues as to his whereabouts earlier in the day on Friday, May 28th. Austin’s cached Twitter account shows a tweet at 1:41PM asking why there was "nothing but foreigners in the Social Security office". In a 2:03PM reply to "BrintCity", who had asked Austin what he was doing for the weekend, Austin says he is in Washington, D.C. Austin later replied to "BrintCity", saying he had to get a new ID and "social security card and birth certificate I lost all my shit...I don't even exist right now..hahah!!!"

These tweets seem to establish Austin as being in Washington, D.C. as late as 2:30PM on Friday afternoon. While it would certainly not be impossible to leave D.C. sometime after 2:30 and fly to Miami in time to go clubbing that night, the subsequent tweets of Austin being "up super early" and going to get on "da bird" do not seem to jibe with that notion. In addition, the context of the tweets before and after the Club Liv post really makes it seem just like a random posting of a Rick Ross line.

This point is significant because the May 29th tweet has been used as a jumping-off point for many news and blog reports of the NCAA’s inquiry. In fact, many media outlets are erroneously reporting that the party being investigated by the NCAA took place Memorial Day weekend, when it has been established that the big party in question was actually two weeks earlier. If Austin’s tweet was really quoting a rap lyric, then many, many reports out there about the incident and the investigation are incorrect based on a bad time stamp and an out-of-context tweet.

Moreover, it was advertised that Austin’s Twitter account was a potential treasure trove of NCAA violations, but is this really the case? Again, our friends at State Fans Nation have spent much time and effort to post Austin’s photos in the hopes that the merest appearance of impropriety would further taint the situation. Austin posted a photo of a $140 dinner tab at the Washington, D.C. Cheesecake Factory but tweeted that he was out to dinner with his family that night. He also posted photos of a Bentley, but it stands to reason that within a year he will be making Bentley money, so would it be so out of line for him to be shopping them now?

So what does all this mean? Ultimately the Club Liv tweet proves nothing. It is highly unlikely Austin was even in Miami at the time of the tweet, turning the focus back to the party of two weeks before. In no way does that absolve Marvin Austin of accountability for being at that party. His presence there is well documented, both in photos and in his Twitter account. On the other hand, if it was an NFL player's party with zero agent presence, then is that a violation assuming players paid their way there? Marcell Dareus said there were agents present but his story (or at least the one put out by his family source) has been debunked. Still, if agents were involved, then Austin will have to answer for that.

Nevertheless, one of the prime pillars of this entire story, the Club Liv tweet, appears to be nothing but a simple rap lyric after all. More important, based on the available evidence, Austin's entire Twitter feed does not appear to be as damning as some have reported (or hoped). Is the record incomplete? Sure. Could some random tweet surface casting guilt on Austin and others? Possibly. Until then we can only speculate on what we have before us and given this fresh look, Austin's tweets are proving anything but slam dunks on potential NCAA violations.

Note from THF: Credit to Doc for doing the research and putting this all together. Many thanks.