UNC Under Siege Day Six: Time For UNC To Get Preemptive[UPDATED]

Share All sharing options for: UNC Under Siege Day Six: Time For UNC To Get Preemptive[UPDATED] 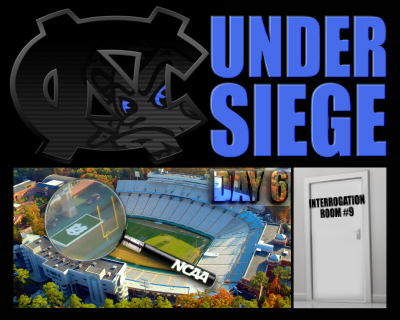 Credit to reader Capt. ButchRoy for the graphic

Inside Carolina, who initially broke the story last Thursday that the NCAA would be performing a colonoscopy and endoscopy on UNC football simultaneously, has some more juicy tidbits about where the investigation is going:

As Inside Carolina reported on Thursday evening, the investigation centers on possible improper benefits provided to seniors Marvin Austin, a defensive tackle, and Greg Little, a wide receiver, as well as several other NFL Draft prospects that elected to come back for the 2010 season. The NCAA inquired about benefits coming from non-University influences that included rent, jewelry and travel.

New information has emerged that the travel inquiries included weekend trips to both Miami and Las Vegas. While Austin’s travel expenses to South Florida remain a focal point of the investigation, IC has confirmed that an undisclosed player’s travel expenses for one of the trips in question were properly paid for by an immediate family member.

Despite various players being interviewed by NCAA representatives last week, the investigation has seemingly narrowed to a pair of Tar Heels.

"It’s starting to look like Austin and possibly one other player are the only ones in danger of facing disciplinary action, and that’s not even a sure thing at this point," a source told IC on the condition of anonymity.

If it ends up only being Marvin Austin and a another player, that might be the best case scenario, especially in the long term. Losing Austin would hurt since UNC somehow has zero depth at defensive tackle. Jim Young runs down the possibilities for UNC if Austin misses any or all of the season. Needless to say it would leave a hole but even more problematic, Austin is a focal point for an opposing offensive line which frees up the other UNC defensive stars to do unholy things in the backfield.Losing Austin gives the opposing offensive coordinator one less highly talented player to worry about.

As for the other player, no one knows who that might be. Greg Little seems to be the next most oft mentioned name making him the favorite. If it is Little that will sting but only if UNC does not get the remaining receivers in the fold to step up or the running game sucks. Otherwise they might get by. Since UNC's offense is weak to begin with, it is very much an all hands on deck area.

The question now is whether UNC should make some sort of effort to get out ahead of this by handing down suspensions now. I am all for innocent until proven guilty however, UNC knows that the NCAA knows at this point. I am going to assume that UNC compliance and Butch Davis have had the same conversations with Austin, Little and the rest of the players interviewed by the NCAA. It is possible no one did anything wrong but I have serious doubts that is the case. The dilemma facing Davis and UNC is whether they should levy their own disciplinary actions against potentially guilty players such as indefinite suspensions pending the NCAA's final verdict. The upside to taking action now is it allows Davis to look like he is in control of his program. While he cannot comment on the investigation, Davis can make a statement about what they will and will not tolerate. The downside to suspending a player is you are basically declaring them guilty and tossing them under the bus. The important condition here is whether or not UNC believes the findings to this point will result in major NCAA disciplinary action against current UNC players. If so, then handing down a suspension now gives the impression that UNC is willing to put the program as a whole ahead of any player. The way this is unfolding seems to indicate the football program as a whole will be spared sanctions. This will be chalked up as the irresponsible actions of one or two players and not reflective of the program or coaches in general. Assuming that happens, the offenders can be dealt with and UNC can make a few publicized moves to illustrate how they plan to prevent such incidents going forward.

Over the next five days, Butch Davis has two major public appearances(Triangle Pigskin Preview and ACC Operation Kickoff) planned where he will be forced to answer questions from the media. The NCAA prohibits him from commenting on the investigation so there will be very little he can say. However, he can illustrate that UNC is taking this very seriously. Yes, it sucks for Austin or any other players to be suspended before the NCAA has actually ruled. Unfortunately, if UNC has an inkling of where this is going then they need to do something preemptive on their end with hopes it might curry favor with the NCAA and salvage the program's reputation as much as possible.

My understanding is they wanted to know if he had improper contact with an agent," Greg Little Sr. said Tuesday. "Beyond that I don't know what's going on."

Little Sr. said his son and defensive tackle Marvin Austin took a spring break trip to Miami in March. Little Sr. did not know if his son was asked about the trip by the NCAA, which according to ESPN, is the focus of the NCAA inquiry of the UNC football program.

"I gave him money for all of his expenses," Little Sr. said.

Something to consider here. If you look at the tweets from Marvin Austin where he refers to staying at a club called The Liv and getting bottle service, those dates are in late May. As Little, Sr. points out his son and Austin went to Miami in March. It is possible the Miami trip causing issues for Austin is the one in May. Austin and Little may have gone for spring break and nothing untoward occurred which could help clear the WR. As for Austin, he left his Tweet photo account active which includes pictures of Gucci labels. Doh!

Anyway the NCAA is still looking into all of this but apparently golf lessons for T.J. Yates are not a concern.