Share All sharing options for: UNC Under Siege Day 13: Zzzzzzzzzzz....... 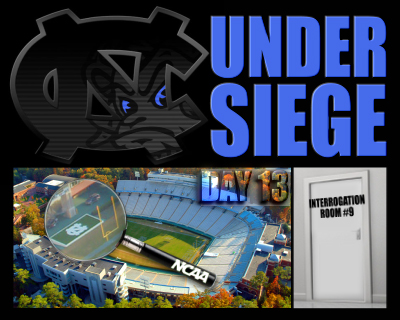 After almost two weeks of playing whack-a-mole with news stories, speculation and whatever people could produce from Google cache, it appears this story has leveled off. The pilot has turned off the seat belt sign. You are now free to move about other topics such as what might happen on the football field this season. At this point it feels very much like the story surrounding this investigation has reached cruising altitude. Barring turbulence all we are waiting for now is some sort of indication from the NCAA they intend to land the plane.

For the sake of housekeeping, there was one item that surfaced yesterday concerning Marvin Austin training at Proactive Sports in California. The NCAA is looking into how that trip was paid for seeing as there are connections to Kentwan Balmer's agent Gary Wichard who also is associated with UNC assistant coach John Blake who NCSU fans believe is the devil or something. Via The Sporting News:

Sources told SportsBusiness Journal, a sister publication of Sporting News, that one of the things the NCAA is investigating is who paid for Austin's training at Thousand Oaks, Calif.-based Proactive Sports Performance, a training facility where all of Wichard's rookie clients have trained for the NFL draft in the last five years. Austin is listed as a client on Proactive Sports' website. Officials from the training facility did not return phone calls or an e-mail.

Wichard has been quoted as saying that he has not traveled to North Carolina nor recruited Austin. "I've never talked to him about representing him. I've never gone down there [to North Carolina] and I never will," Wichard told The Charlotte Observer earlier this month.

Kentwan is Wichard client Kentwan Balmer, a defensive end for the San Francisco 49ers who was a 2008 first-round pick out of North Carolina. Suh was the No. 2 pick in this year's NFL draft after a standout career as a defensive tackle at Nebraska.

Sources said that NCAA investigators have talked to UNC defensive line coach John Blake, who Wichard said has been one of his best friends since 1985.

If all of this turns out to be a minor issue for UNC then ABCers will add the names Gary Wichard to the long list of alleged skeletons in UNC's closet. Many years from now they will sit around spinning conspiracy theories about how the whole John Blake-Gary Wichard-Marvin Austin-Keyser Soze cabal joined with the North Carolina-ACC Officiating Illuminati to force Tom O'Brien to keep Mike Archer as defensive coordinator.

As for this training facility and Austin's visit to it. It is not like it was a huge secret. Austin's name appears on their website as a client. If you watched this unfold on Twitter yesterday, the part about the NCAA investigating who paid for Austin's training was passed around, then a denial from Wichard, then a link to the the site with Austin's name on it. By the time we got there it pretty much lost steam and no one really cared about it anymore. Granted I would not strike it off as a non-concern. The NCAA might find something there but it is interesting how quickly the media dropped that toy because some other new shiny object entered the room.

One more item to clear up. Much was made of the UNC coaching staff telling recruit Tim Scott what kind of impact they thought the NCAA investigation would have on UNC. The basic line was the program would not be hurt, future players would not be impacted and any current players impact would pay back improper benefits. The question arises as to whether the coaches were speaking on actual knowledge or speculating based on past NCAA rulings and a glance at the rulebook. My money is on the latter.

For one, this is being addressed as an agent/player contact issue which means they are looking at individual players and agents. Now that is not to say they will not find something that could affect the program as a whole but all signs right now indicate that will not be the case. Secondly, there is known precedent for how the NCAA handles individual players receiving improper benefits. The most recent is UK's John Wall who was suspended two games and forced to repay around $800 after he was provided travel expenses during his junior year of high school. It should be noted that the NCAA began investigating Wall prior to the season and wrapped it up before UK's preseason games. In terms of improper benefits from agents, the Columbus Dispatch, in 2009, published several examples of various NCAA cases from around the country. One of those dealt directly with an agent giving improper benefits to a player at Oklahoma.

The school's report: An unidentified football player traveled to an NFL draft party as the guest of a former college teammate. The $1,300 trip, which included use of a credit card, was paid for by the former teammate's agent. The school erased all names from the violation report.

Penalty: The football player had to repay $832 to a charity from his scholarship, a federal Pell grant, and the school-issued spending money he received during the team's trip to the BCS National Championship game.

The grain of salt warning applies. The entire story is not known but what we can reasonably conclude from the NCAA's handling of Wall and others is players repaying benefits with a possible suspension attached seems to be SOP for the NCAA in cases like this. Bearing that in mind, what the coaches told Scott is in line with past NCAA actions.

Does that mean the NCAA will act similarly here? There is no way of knowing since (1) the NCAA has a vendetta against agents right now and might decide to launch a disproportional response on schools to make a point and (2) we have no idea what anyone at UNC is guilty of other than excessive use of Twitter.