UNC Under Siege Day 7, Part II: About This May 15th Photo

Share All sharing options for: UNC Under Siege Day 7, Part II: About This May 15th Photo 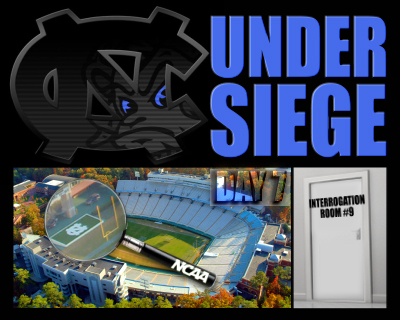 Please note this is probably more about defending due process, innocent until proven guilty and truth in blogging.

As you know, this picture and ones like it began circulating this morning showing Greg Little in Miami with Marvin Austin. The dates on the pictures indicate it was May 15th.

Yesterday, we had Greg Little's father tell ACC Now that his son took a trip to Miami with Austin in March for spring break and he provided his son with money for expenses.

Let's go ahead and put everything on the table right now.

1. What Greg Little, Sr said about his son taking a parent funded spring break trip with Austin is in no way contradicted by pictures of Little in Miami on May 15th. Why? For any number of reasons, the most likely assumption being there was a 2nd trip that Little, Sr. had no knowledge of or at worse chose not to mention when talking to Joe Giglio.

2. The May 15th trip does not mean Little, Sr. lied about paying for a spring break trip. It also does not mean the March trip did not happen. In short we have evidence that (1) Little went to Miami for spring break paid for by his father and (2) Little was in Miami on May 15th with Austin absent the knowledge of how it was funded. Let me say it again: There is no contradiction. There is no evidence of deception on the part of Little, Sr as best as we can glean from his statements to Giglio.

3. No one outside of the people in the room with Little and the NCAA investigators can attest to whether or not Little withheld information, evaded questions, lied about his birthday or claimed to like anchovies on his pizza. For all we know Little walked into the room, threw himself on the floor and spilled the beans about everything he knew. The bottom line is simply this: We don't know anything other than what is in public view which is mostly pieces of a larger puzzle. According to Little, Sr. he has no idea what the NCAA asked about or what his son told them except it is about improper contact with an agent which everyone who cared knew by the time Little, Sr. answered the phone.

So, saying that the May 15th photo means anyone lied is disingenuous at best(irony!) Now, if anyone wants to speculate that the May 15th trip is evidence that Little and Austin were receiving improper benefits as it pertained to that instance, knock yourself out. There is certainly merit to that argument in light of the NCAA Alabama declaring Alabama DE Marcell Dareus ineligible for allegedly taking a trip to Miami to attend an agent hosted party. The question certainly arises whether the party in the pictures of Austin and Little is the same party which has cost Dareus his eligibility has earned Dareus NCAA scrutiny.[Correction: I misread the article on Dareus and thought the NCAA suspended him. The suspension came from Alabama and is routine for them to do so ahead of an NCAA finding. It should be noted that sort of action lends weight to my belief Butch Davis and UNC should do something before the NCAA does and wait for a ruling.]

Finally let me make the following clear: This should not be taken as a defense of either Little or Austin for alleged violations of NCAA rules. My beef here is the rush to declare Little in particular guilty of lying to the NCAA without any known evidence he did so. Yes, I am playing the "innocent until proven guilty" card to a point. Based on what we know it appears that Marvin Austin is in a heap of trouble given the numerous pictures of expensive gifts and at least one if not two or three trips to Miami. Based on what we know Greg Little took two trips to Miami with Austin, one of which is said to have been covered by his father and a second funded by a source yet to be revealed. On the basis of these items we can rationally speculate that Austin is probably done at UNC. As for Little, we have no idea. If the May 15th trip was the same one that got the Bama DE investigated then Little could be in it up to his neck. If it wasn't or the funding can be rationally explained coupled with the assumption Little was truthful with the NCAA then we can assume he will be fine.

At the end of the day, until the NCAA tells us something or removes the sock from Dick Baddour's mouth we can only speculate but do so rationally with an eye on the evidence in hand.