UNC Under Siege Day 8: Along Came The State

Share All sharing options for: UNC Under Siege Day 8: Along Came The State 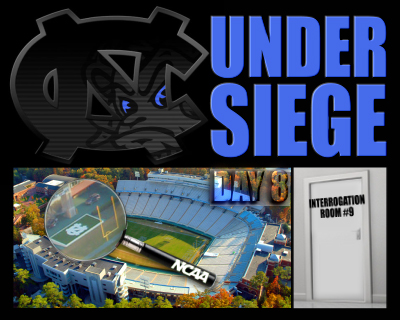 While the NCAA continues to investigate what Marvin Austin and Greg Little were up to in Miami, the NC Secretary of State, Elaine Marshall has decided to launch a criminal probe into agent involvement with UNC players. The probe is not focused on UNC or the players but rather the agents in an effort to determine if anyone violated the North Carolina Uniform Athlete Agent Act. There is no indication who initiated the probe. UNC did not file a complaint on the matter.

Let me say this is a bad idea. If UNC did not file a complaint it is probably because they want this whole mess to go away once the NCAA completes their investigation. Having a state office probing the matter means it will continue to be a blip on the radar. There is also the possibility that Marshall's office, having full subpoena power could possibly dredge up information the NCAA misses creating more problems for UNC. I imagine a scenario where the NCAA finishes their investigation, passes judgment which, hypothetically speaking, is losing Austin and Little for the season. The Heels go out, finish 9-4 or something believing their roster is clean. Then Marshall's probe questions various agents who admit they gave gifts to other UNC players not previously investigated by the NCAA. This results in a 2nd look from the governing body who declares players who played in 2010 ineligible resulting in a vacated season. Now, by no means do I think players who violated NCAA rules should be let off. However, if the NCAA determines only Austin and Little are the only tainted players, I will be glad to quit while UNC is only slightly behind. The last thing anyone at UNC wants is this to continue to be an issue and Marshall's probe does exactly that.

UPDATE (Doc): Elaine Marshall's office says they have opened the probe not because they have received a complaint but in response to "media reports". There are lots of media reports of wrongdoing that do not result in investigations by the Secretary of State's office. Don't forget Marshall is running for U.S. Senate and a big, high-profile investigation is a good way to keep her name in the headlines for free. I'm not saying that's why her office is taking this on, but it does make you wonder. Feel free to draw your own conclusions. Carry on.

On the NCAA investigation front, Don Kausler at the Birmingham News is reporting that recently suspended Alabama DE Marcell Dareus was invited to that now infamous agent funded party in Miami by....wait for it.....Marvin Austin! I was asked on Twitter by FSU blogger Tomahawk Nation would Austin's stupidity bring a lot of people down. If you count SCAR's Weslye Saunders, Little, Daerues and Austin himself the tally to four. Also, I asked previously if the party Little and Austin are seen attending in the now infamous Tweetphoto series was the same agent hosted party that is trouble Dareus? The answer is yes which means Little might be in as much trouble as Austin.

At this point I think it is clear the best course of action for UNC is to suspend Marvin Austin pending the conclusion of the investigation. Yes, it will look like they are copying Alabama. That cannot be worse than having Butch Davis do nothing while shoe after shoe drops in the media about Austin. Every time a new piece of information comes out showing that Austin broke a rule or in this case was instrumental in another player breaking a rule, the worse UNC looks for not having at least suspended him pending the NCAA's findings. Besides that, his actions have sullied the UNC's reputation, jeopardized the eligibility of other athletes and hurt his team's chances for a potential ACC title. Yet, Austin will bear no real consequences. Yes, his draft stock will take a hit if he does not play but at day's end he will get paid and UNC gets a black eye. And spare me any talk of these only being allegations. The writing is on the wall here. There is entirely too many questions surrounding Austin to believe he can come out of this clean enough to be on the field again. Obviously we wait for the final verdict which is starting to look more anti-climatic as the days pass by.

Side note: Georgia is now in the NCAA crosshairs which begs the question: Who does Marvin Austin know in Athens?