Bruce Carter Named ACC Defensive Back Of The Week

Share All sharing options for: Bruce Carter Named ACC Defensive Back Of The Week

No Crap! The Magazine Exclusive via the ACC.

DEFENSIVE BACK – Bruce Carter, North Carolina, LB, Sr., 6-3, 235, Havelock, N.C. (Havelock) Carter blocked a punt, returned an interception 55 yards and had seven tackles in Carolina’s 17-13 win at Rutgers. With Rutgers driving in Carolina territory, Carter made a leaping grab of Tom Savage’s second-quarter pass and returned it to the Rutgers 28-yard line. Carolina went on to score a touchdown and cut the lead to 10-7. In the fourth quarter, with Carolina holding a 14-13 lead, Carter blocked a punt, his sixth career blocked kick, and the Tar Heels took over at the Rutgers 35. Carolina kicked a field goal on the ensuing drive. Carter also added a 4-yard tackle for loss.

The ACC is saying it is Carter's sixth blocked punt of his career. Here at THF we noted it as his seventh based on numerous sources, one of them UNC. Still six or seven it still an amazing number for one player. In case you were wondering the NCAA career record for blocked punts 10 by Central Michigan's James King from 2001-2004. King also holds the record for blocked punts in a season(2001) at seven and is tied with Memphis' Ken Irvin for most blocks in a game with four. In other words Carter is sitting in pretty stout company. Carter's blocked punt and huge interception return were pivotal in UNC's win over Rutgers. If UNC ends up playing ECU still missing a huge swath of key players(not to mention a hobbled Quan Sturdivant), the Heels are going to need more "Brruuuuuuucccceeee!" moments vs ECU.

At this point, if find yourself given to random moments of saying "Bruuuuuuuuuccccceeee!" out loud. That's okay, it is perfectly understandable.

Update: Via Inside Carolina, here is The Freak in action: 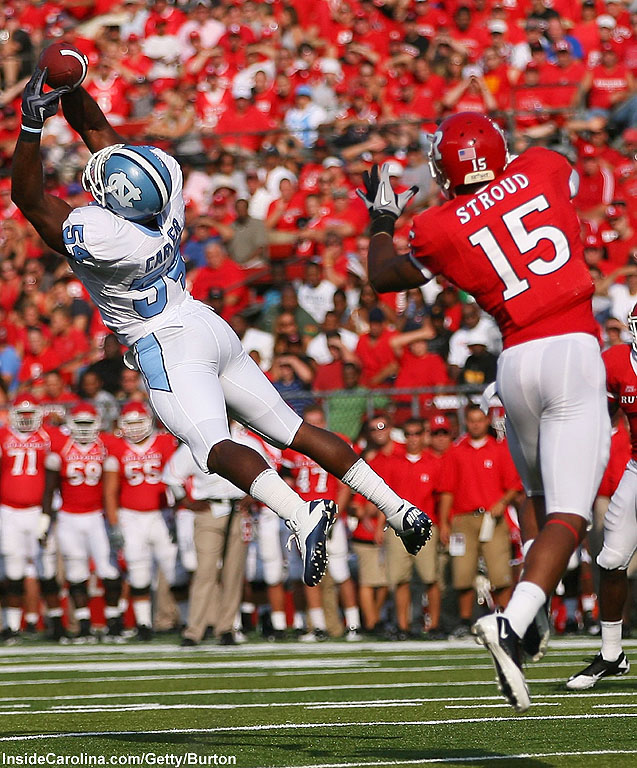