Share All sharing options for: No News Is...Well...No News

Butch Davis entertained local media and Dr. Seuss lovers during his weekly Monday press conference where he announced UNC still had as many eligible players as the last time that question was asked. Oh and Marvin Austin is earning his way back onto the practice field. No word on how that is being accomplished but using a Capital One credit card is apparently the best way to earn rewards. As for the rest of it? It went like this.

Rutgers plays hard, very tough blah blah blah. Greg Schiano has a good team, nice program yada yada yada. Excited about playing the game, tried to get Duke to take the game since, you know they have significant New Jersey ties but seeing Alabama could not pay them $2 million dollars to get their butts kicked on a neutral site instead of at Wallace Wade they were not interested. Squirrel!

In other NCAA investigation related news, the latest in a long line of focal points in the agent prong(try to keep track of them as they go by) agent-like creature Chris Hawkins opened up to his hometown paper down in Kinston. Hawkins implored that he has done nothing wrong in that Richard Nixon sort of way. He also does not understand why he has been labeled an agent by the NCAA when all he does(according to him) is help guys out when it comes to making decisions about agents. He also denied drug use or being involved in drugs despite driving a moving van which had cocaine in the back and marijuana in the front. I suppose that is plausible but really I don't give a crap.  And yes, there have been entirely too many references to illegal drugs on this blog in the past four months. I lay awake at night worrying about what Google Ads is going to put on the sidebar.

According to the article, Hawkins is alleged to have set up meetings between players and agents, a charge he denies. If he did that is what the NCAA considers "promoting or marketing a student-athlete" which makes Hawkins an agent-like creature. Just so we are clear. Someone who arranges for a student-athlete to meet with an agent is an agent. There is also an issue of timing since players can have agent contact after their junior season has ended but only for a short period. That appears to be a separate issue from Hawkins taking Orc form and participating in the raid of Helms Deep. For my money, I could not care less what Hawkins has to say right now. I will wait for the report and see what his involvement is then.

For the record, it has been 66 days since the NCAA investigation into UNC football became public. It has been far longer since I posted this. Since we could all use a pick me up, here ya go. Squirrel! 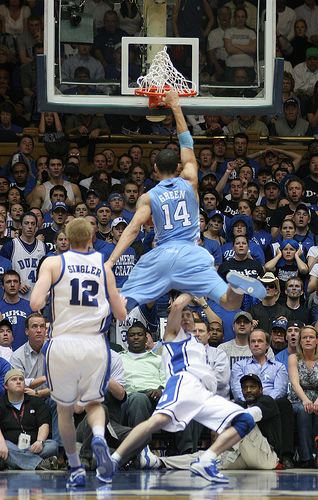