Share All sharing options for: Youth Culture Killed My Conference: Freshman Playing Time in the ACC

I can't be sure that last Wednesday's second half blue team was the first time five freshman in UNC jersies shared the court since the freshman team was eliminated in 1973, but I'd like to think that was. It was definitely a rare sight. Carolina fans aren't used to having that many freshman get so much playing time, and with tomorrow's opponent an equally freshmen-driven team, it make you wonder – how much playing time are the folks straight out of high school getting this season?

So I swung by Ken Pomeroy's site and did a little bit of basic math. I totaled the percentage of minutes played for all the freshmen listed under the player stats. This throws out anyone who mostly gets minutes in garbage time. Then I divided by five to rescale everything to between 0 and 100%. And this is what I came up with: 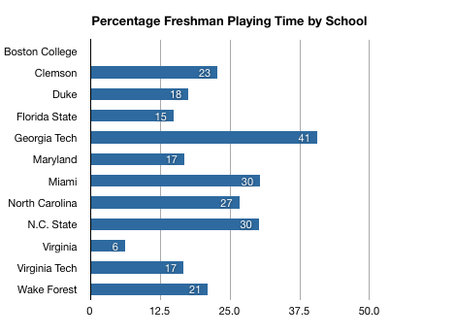 UNC's freshman five are getting 27% of the available playing time this season; after Wednesday, I'm sure some people will be advocating for more. In this season's talent-depleted ACC, that's only good for fourth most in the conference. Naturally, Georgia Tech's four freshmen are leading the pack, getting more playing time than any other class. (Boston College, bringing up the other end, has no freshmen on their team this season.)

So let's take a look at Tech's four freshmen. The one getting the most playing time is not the biggest name, oddly enough. It's Mfon Udofia, the Yellow Jacket's one true point guard, and he handles the ball pretty well. He turns it over much less often than Larry Drew or Dexter Strickland, but should pass more; he's not among the more effective scorers in the starting lineup, but he takes a lot of shots.

The big threat, of course, is Derrick Favors. Paired in the front court with junior Gani Lawal, the two are the engine of this team. Together the combine for eighteen rebounds a game and twenty-eight points, and the teams that have victories over Tech have all shut down one if not both of them. Which UNC did very well last season, holding Lawal to 12 points and 4 rebounds and fellow forward Zachery Peacock to 2 and 4. And if you're thinking, "Carolina still has Davis and Thompson and a raft of freshmen big men, surely they can outrebound this team again," then, well, you haven't seen UNC play this year. But it would be nice if the played like that, wouldn't it?

There are two other freshmen getting playing time for the Jackets; Glen Rice, Jr., known primarily for making you feel old because Glen Rice has a son in college, and Brian Oliver, a three-point specialist coming off the bench. If anythings going to kill the Heels, though, it won't be the freshman. It will be Peacock and combo guard Iman Shumpert, who lead the teams in steals. Tech has one of the best defenses in the country – they're very long and hard to shoot over – and if UNC remains turnover prone and weaker than expected in rebounding, they'll lose their second straight.

And while we're on the topic of freshmen getting playing time at UNC, you may wonder how this year's class stands up. And while they have numbers, they don't have the opportunities of the 2006 and 2007 teams: 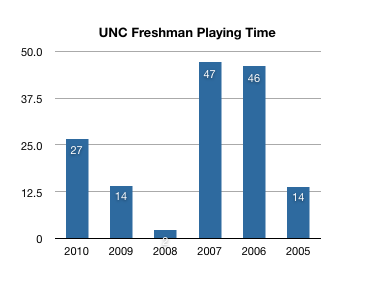 The previous high-freshmen teams had pretty good results. I'm beginning to suspect this team won't be able to follow in that tradition.