Share All sharing options for: Today's Unsolicited Advice for Carolina

The great thing about losing streaks – for a sufficiently small value of "great" – is that everybody knows what's wrong, and they're just lining up to tell you. First out of the gate, John Gasaway:

I certainly didn’t think it was unreasonable, then, to expect similarly big things from this 2010 group. After all, they have way more experience--primarily in the persons of Davis, Thompson, and Ginyard--than the 2006 team had. To this (admittedly early) point in the season, however, there is precious little resemblance between the two teams.

OK, so maybe there is a slight resemblance between the Tar Heels then and now. This 2010 team is, coincidentally, operating at the exact same pace as their 2006 predecessors. It’s just that this present-day version of Carolina isn’t getting the same results from that fast tempo. How come?

See the problem there? Gasaway's comparing four games to UNC's entire 16-game conference slate in 2006. The Heels' first four ACC games that year were nothing to write home about, either. In fact, when you compare the numbers from those two stretches, a lot of the differences melt away: 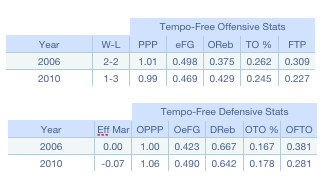 The only criticisms of Gasaway's that ring true are UNC's decline in free throw shooting, which is really bad this year, and their shooting defense, as teams have scored at will. The rest of Carolina's problems this season plagued the 2006 squad as well, which gives me a bit of hope. This has been turned around before.

Andrew Jones has another theory on the root of UNC's problems. They're just not talented enough:

That brings up another problem few have discussed: Carolina isn’t that talented.

According to Scout.com, Marcus Ginyard was rated the 52nd best player in his recruiting class while Deon Thompson was No. 36, Will Graves No. 79, Larry Drew No. 68, Dexter Strickland No. 33, Leslie McDonald No. 53, and the Wears were Nos. 55 and 56.

Davis was No. 10, Zeller No. 21, John Henson No. 4, and they combined for nine minutes against Wake. Even still, this performance wasn’t about not having Davis and Zeller, as they have also underachieved, especially in recent weeks.

This is why a turnaround must be a collective deal. The 1997 team started out 0-3 in the ACC and last year’s squad was 0-2, but there are no Antawn Jamisons, Vince Carters, Tyler Hansbroughs or Ty Lawsons on this year’s roster.

You know what would make that argument a little stronger? If you didn't have numbers under a hundred for all those players you just named. A lot of basketball teams manage to take the floor without top-100 recruits and do better than 1-3 in conference. Whatever UNC's problem is, it isn't a lack of talent on the court. It's what the talent is doing.