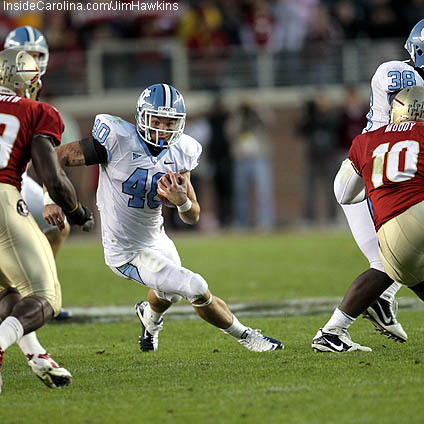 This is Hunter Furr. Otherwise known as Death Incarnate, the Destroyer of Worlds. He of the 9.0 yards per carry in the game on Saturday which left massive burning holes right through the middle of the FSU defense. Furr and his 27 yards on three carries means if Butch Davis would give him 25 chances per game he would destroy Amos Lawrence's career rushing mark by next November or something. In fact I am wondering why Furr was not left in the game but I soon realized Davis was afraid his continued presence would constitute an unfair competitive advantage for UNC and quite possibly draw attention from the Federal government for illicitly using a weapon of mass destruction. I mean, LOOK AT THOSE EYES! HE CAN SHOOT DEATH RAYS FROM HIS EYES!!!!!

In all seriousness, I thought we should all take a moment to acknowledge the absolute clutchness(is that a word?) of Mr. Furr's three carries on Saturday since I am not sure UNC wins the game without them. It was an incredible situation for the fourth string running back to find himself in. Johnny White was in the locker room with his clavicle in at least two pieces. Shaun Draughn, heck I still don't know where he was at while this was going on. Anthony Elzy had been shaken up. Ryan Houston was back in Chapel Hill in the fetal position on the floor of his apartment, crying inconsolably while tenderly stroking his redshirt. So it was either Furr or nothing. It was Furr. In my opinion this was a perfect storm of Furr having fresh legs, solid work by the offensive line and FSU thinking "there is no way they are handing the ball to THAT guy!" If you have a chance to go back and watch it again(you can on ESPN3.com) it is amazing. Not only did Furr run like his life depended on it but he hit the holes provided for him and had a two handed vise grip on the ball to protect against a soul crushing turnover.

Later today the ACC is probably going to name either T.J. Yates or Dwight Jones or possibly both a player(s) of the week but here at THF we raise our glass of Diet Mt. Dew to Hunter Furr who did what apparently no other UNC running back could do on Saturday and that was collect significant positive yardage versus the Seminole run defense.