Get your pens ready, because it's that time of year again! 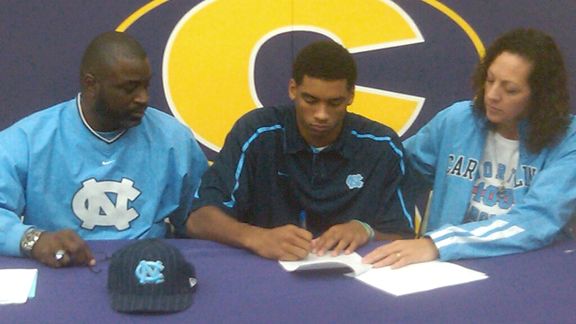 So let's waste no time introducing the newest members of the Carolina basketball tradition...

James McAdoo is not joining the Carolina family.  He IS Carolina family, as his uncle was the great Bob McAdoo.  James is considered to be more of an "old school" low post player, as he plays mostly with his back to the basket and is an excellent rebounder and shot blocker.  Nonetheless, he is an elite prospect as is evidenced by the fact that in 2009, McAdoo became the youngest player ever (age 16) to be named USA Basketball's Male Athlete of the Year.   Assuming Henson and Zeller are both back next year, the three should combine to form a very talented and diverse frontline.

Hairston comes to UNC with a reputation of being an incredible shooter with great size, which he uses well when finishing at the rim.  It will be very interesting to see how Roy uses Bullock and Hairston, as the thought of having a tall, well-built sharpshooter on either wing must be incredibly tantalizing and has the potential to make Carolina utterly unzoneable.  The knock on Hairston, as it is with most great shooters, is that he needs to work on his mid-range game, but similar statements were made about Wayne Ellington, and that turned out pretty well for the Heels.

I can't really say that I know a lot about Simmons, who will join the team as a "Preferred Walk-On."  His ESPN bio states that he is a "terrific rebounder" and a "a warrior who wants to compete on every single possession."  These are always terrific qualities to have on a team, and when you can get them without giving up a scholarship it is that much better.  In some ways Jackson sounds a bit like Justin Bohlander, who played about 7 mpg in 18 games during his one season at UNC in 2004.  Assuming Henson and Zeller are back next season, it is hard to imagine Simmons providing much more than that.

Well, maybe not completely final, as there is a pretty big announcement coming tomorrow afternoon that could significantly impact North Carolina.  As it stands now, UNC has three offers still outstanding in the class of 2011: power forward Cody Zeller (#14), and centers Adjehi Baru (#31) and Angelo Chol (#63).  Zeller will be making his decision known tomorrow, and while Indiana is the favorite, UNC is still a strong contender.  Making tomorrow's announcement even more interesting was today's announcement by Baru that he would not be signing today.  This led me to ask Dave Telep (via Twitter) if he thought that Baru was waiting to see if Zeller chose UNC before making his decision.  Telep agreed that that appeared to be the case, which would mean that the Zeller decision could have an enormous effect on the ACC, as Maryland was/is thought to be the leader for his services.  Chol, on the other hand, will not make his decision until February 17th, and is scheduled to visit Chapel Hill on January 2nd, when the Heels take on St. Francis.

So where does that put the Heels right now?  The table below lists all of UNC's scholarship commitments and offers for the next two years:

If I had to guess, UNC will only get (take?) one of the three bigs offered in the Class of 2011, with Zeller being the obvious prize.  That would put UNC at 12 total scholarships for next year, assuming, of course, that Harrison Barnes returns for year two, which is probably not the safest assumption.  If Barnes is the only member of this year's team that leaves, then UNC will probably be a consensus top-5 team to start the season next year.   However, should everyone return, then the Heels will be a unanimous preseason #1 and the (silly) talk of an undefeated season will start about 30 nanoseconds after the announcement is made.

Looking longer term, with five offers out to current high school juniors, UNC does run the risk of being over-committed (assuming Zeller, Baru, or Chol sign).  Obviously, the chances of all 5 players signing with Carolina are remote, but more importantly, I think this signals that Roy is well aware of the fact that the chance that Henson, Strickland, Barnes, Bullock, McAdoo, and Hairston are all still on the roster for the 2013 season is almost nil.