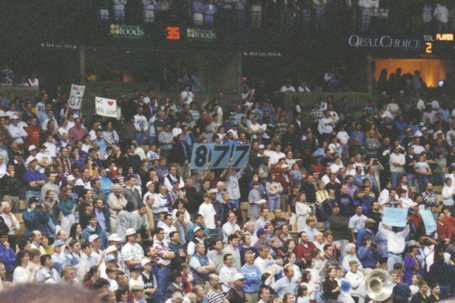 I suppose I should mention something about Mike Krzyzewski tying Dean Smith in career wins last night as Duke beat the mighty Elon. I don't really care all that much though, because Coach Smith never did. In fact, I firmly believe that if the 1997 season had ended with a few more losses – and it was shaping up to early on – he would have retired short of Adolph Rupp's record, and been happier doing so. We were all thrilled for him, because he was a great coach and a better man, and it was nice for him to surpass a rather horrible man to be astride the coaching world. But Dean Smith was actively avoiding this type of spotlight. He hated it. He was thrilled when Bob Knight passed him, loved pointing out that NAIA coaches were still above him (he would always bring up Big House Gaines' 830 wins when people talked about win totals, and will probably cheer to fall even further down the list. So although it annoys me, a partisan Carolina fan, I just duck the hagiographies and go on with things. After all, there's a limit to how stupid even they can be.

Nobody in his right mind could have ever imagined that the midwesterner with the funny name at the private school in Durham could ever overtake the folksy Kansan at the public school in Chapel Hill in terms of  success and stature, but Duke’s win over Elon tonight is just one more huge prong in an argument that’s long been settled: when it comes to K & Dean, Krzyzewski is the better coach, and history will quite possibly judge him as the second-best of all-time behind John Wooden.  Sorry, Heels fans, but it’s true.