Share All sharing options for: Comparing This Year's Start to Last Year's

This year's basketball team hasn't started the year as the indomitable force the preseason polls had predicted; in fact, it's been pretty similar to last season, with wins over the smaller teams of varying margins, and some losses on the big stage. After last December's game against Texas, UNC stood 8-3 and ranked 10th. This year after the same game they're 7-4 and unranked. The concern, of course, isn't the current state of the team, but whether it foretells a second disastrous trip through the ACC. So how does this year's team stack up to last year's so far? I calculated the tempo-fee stats through each year's Texas game to do a comparison:

We'll start with the offense. Last year's team was clicking a lot better in this regard, scoring more and getting more boards. Where this team is improved, actually, is in some of the categories that I've criticized most – turnovers and free throw shooting. That's a pretty recent improvement, too. The last time UNC's turnover percentage cracked 17% in a game was against Illinois. This stat is definitely trending lower, unlike last season where it just bounced around.

On defense, the Heels are better and rebounding, and much more willing to foul. The first is surprising, giving the the number of big men last year versus this season, while the second makes more sense. The end result is an overall improved defensive effort, which is a good sign since last year's defense was unusually poor during the conference season.

Of course, these numbers are for eleven games of varying competition. Last year's team, for instance, had two near 40-point wins, against NC Central and Presbyterian. So what if we just limit it the five big games of each season? In this case, that's Kentucky, Texas, the Big 10 Challenge game, and the two from the respective early-season tournaments.

As you see, the differences are even more starker. The defense is much, much, better. The offense takes better care of the ball and gets more points from the line but really struggles from the field, and doesn't get the rebounds on the offensive end. The good news is, the scoring has slowly improved over the last few games. If this trend contnues, the team will be in a much better situation than last year.

One more thing – since three-point shooting appears to be an issue, it's good to quantify just how bad it is: 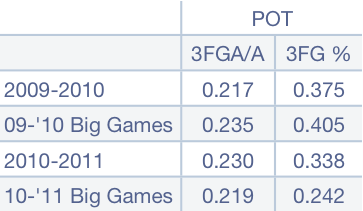 UNC's shooting from beyond the arc is really bad, and it's worse in the big games. The team's aware of it, too. They shoot fewer threes against good teams, and still perform worse.Hopefully Dexter Strickland's resurgence over the last three games is a sign of things to come, because in this category they're really, really, bad.