Man, that was a tough loss.

I don't do moral victories, so we can dispense with talking about it in that manner. There were tons of positives in this game, especially with Harrison Barnes and Dexter Strickland. Kendall Marshall also looked good in limited minutes(more on that later.) The frustrating aspect was the fact UNC weather an early lead by Texas which went up 26-16, rallied to take a one point lead at halftime, then in the 2nd half controlled the game with a 3-7 point advantage through most of the stanza. The combination of a field goal drought for UNC and Texas making shots saw the lead disappear. In the final minute it really came down to Texas making plays when UNC did not. The Heels trailed by one, got a look with Tyler Zeller but the shot did not go down. After two foul shots, Barnes hit a clutch three to tie the game but on the other end freshman Corey Joseph simply hit an incredible shot despite being well defended. 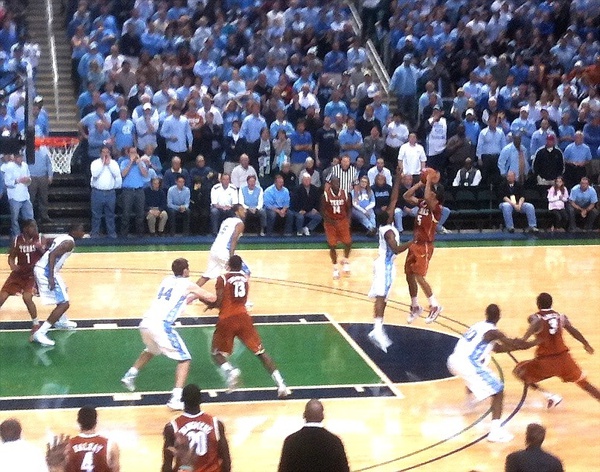 With only 1.4 seconds left, UNC managed to get a look for the win but the shot did not fall from Marshall. Oh, and yes, Roy  having Barnes screen the out of bounds defender in an effort to draw the foul was great coaching, too bad the referees did not give them the call. In the end, UNC was short the key baskets they needed to win the game. Yeah, it sucks but with young teams there is playing well and there is learning how to win. Sometimes the concepts are mutually exclusive which was definitely true of the 2007 team which lost several games because they simply did not make plays, the most famous being the regional final versus Georgetown. This team will learn to win eventually. What stings about this one, besides letting Rick Barnes walk out of NC with a win, is the fact UNC could have and maybe should have won this game. It was right there for the taking and they came up short.

Outside of the way it all ended, I saw a lot of things I really liked. For those of us who have wonder about Dexter Strickland, it was great to see him play the kind of game he did versus Michigan St. last December. The key for him now is to remember to do it again and often. Obviously Texas could not adequately defend Strickland and he took advantage of it. Strickland led the Heels with 18 points on 6-10 shooting, 5-6 from the line, 3 assists and zero turnovers. Strickland also hit the only three he took but you really hope the sophomore walks away from this game with a boost in confidence knowing he is capable of playing this well. Likewise, you can see Barnes making progress towards what we all thought he would be. The only serious complaint about Barnes stat line is the three turnovers. Yeah, he only had three rebounds but UNC had serious issues on the boards all day which was in no way surprising considering how good a rebounding team Texas is. Barnes ended up with 16 on 5-10 shooting and nailed a clutch three to tie the game up. That kind of big shot ability is what everyone assumed Barnes would do at UNC. Well, there it is. Hopefully it is a harbinger of things to come.

One sticking point for me is UNC needs to get some production from the guard play off the bench and outside of Marshall, they really did not. Leslie McDonald has shown he can shoot the ball so getting 0-4 shooting and 0-2 from beyond the arc hurts, especially since he only played 10 minutes. Granted he played less because Strickland was so effective. Still, McDonald needs to do more. It was also not a good game for Bullock who continues to see limited minutes(nine in this one.) Is it his knee? His defense? I would be nice to know. Oh and I know people are down on Justin Watts but he only played eight minutes, scored five points(including a three) and I thought played well. The issue with Watts is he has no hope against talented big men. He simply does not have the size.

And now, for the  main event.

I was in and out of the game in the first half and saw most of the 2nd. One thing about Marshall in this game is he had plenty of "wow" plays. The issue you often run into is getting caught up with those kinds of plays without a fuller evaluation of his performance as a whole. Of course, even the basic stat line seems to indicate Marshall's 15 minutes were more effective that Drew's 25. Marshall had seven points, three assists and one turnover while on the court. Drew's game was...worse. Two points, three assists and four turnovers. Drew also fouled out of the game. So you look at Marshall who drove to the basket and scored more than once while doing things like throwing sick behind the head, no look passes to John Henson for dunks vs Drew who basically struggled. Then again, it's not like UNC's offense struggled during the almost nine minutes Drew played at the end of the game. The Heels were actually up five with 4:25 left only to see Texas reel off six in a row. A pair of Tyler Zeller baskets later gave UNC a three point lead with 1:50 left. In this respect Drew's presence was not that detrimental in the overall performance of the team unless you you fault Drew with certain missed opportunities due to turnovers. On the flip side one could argue Texas gained opportunities with versus Marshall's defense whereas Drew would be more effective in stopping the Longhorns.  I do know from an eyeball perspective on offense Marshall put on a show at times while Drew was average or worse. It is a classic dilemma of playing one guy for his defense and one guy for his offense.  The challenge for Roy may be figuring out which horse to ride when based on many factors, some of which the average fan does not consider.

One final note from Roy in the postgame press conference. He was asked about team confidence and he said this:

Roy also said they need to play better, be more focused and execute. No surprise there but I like the notion this is a group of players who understand they had opportunities and missed them. That usually means they will work their rear ends off to make sure that opportunity does not pass them again. As far as losses goes, this one was tough. At the same time there are positives the individual players can glean from it, not the least of which is, generally being pissed off to the point they put in the work to make sure it does not happen again.