Share All sharing options for: ACC Tempo-Free Conference Only Stats Through January

Sure, we know UNC isn't very good this year. But can we express that disappointment in numerical form? Why yes we can! 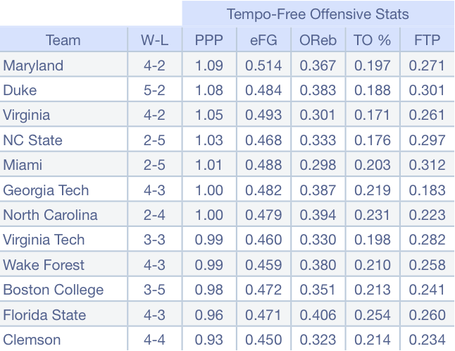 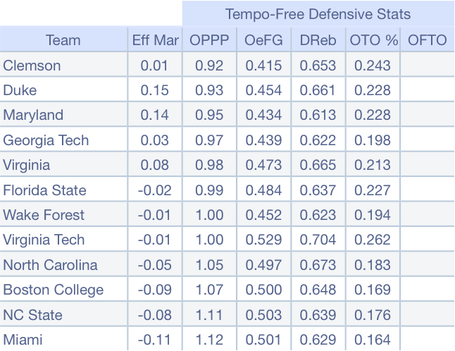 Those, of course, are the tempo-free stats for the conference games to date. I'm missing the opponent's free throw attempt data, because the ACC doesn't feel the need to put that out there in a convenient form but the rest of it is all there. The funny thing is, UNC doesn't come off as all that bad. The rebounding is better than I'd expect from watching the games, as the Heels are second in the conference in both offensive and defensive boards. The shooting comes across as average; five teams shoot better, six shoot worse. That's more a result of poor shooting all-around, however, as it's actually Carolina's worst performance in over a decade. The free throw shooting and turnovers are, unsurprisingly, awful.

How awful, you ask? I've been tracking these stats since the 2005 season, and all of six teams have been worse: Clemson in '05, UNC, Georgia Tech and Maryland in '06, N.C. State in '08 and Georgia Tech last year. Only Carolina finished their respective season with more than five conference wins. The sad thing is, as bad as UNC is in coughing the ball up, Florida State is worse. Circle February 24th on your calendar's now, because that game is going to be a sight to see.

Basically, the last time the offense was this inefficient, the players revolted and Matt Doherty lost his job. The last time the defense was this bad, Roy Williams was still trying to get the phones to work in his new offense. This is frustrating, yes. But at least it's not as strange as what's going on in Clemson.

I don't understand the Tigers. I've never seen a team be dead last in offensive production and top of the heap in defense. They don't look that unbalanced on the court, but that 47-point performance against Duke must be really dragging down their numbers; or the season they're not nearly that bad on the offensive end. Treat the Tigers as an object lesson about obsessing over these numbers; it's early yet, and the sample size is small. The Heels may not be doomed to a five-win conference season.

One more thing – here are some perimeter oriented stats. This is the highest I've ever seen the Heels on the list of three point attempts, for I assume two reasons. One, being down late in a lot of games leads to a lot more long range shots than the Heels are used to taking. And two, there's no crazy ACC team just tossing them up at every opportunity, like in years past. (My personal favorite was State in 2006 who took a full 45% of their shots from behind the arc. They finished third in conference and ran off their coach.) 2006 was also the last time an ACC team made more than 40% of their threes – State, Duke, UNC and Georgia Tech all surpassed that number. And none of them came close to the numbers Maryland is putting up in conference play. It helps that Greivis Vasquez is the only one on the team taking a significant number of shots, I suppose. Perhaps opposing teams should keep a hand in that guy's face. 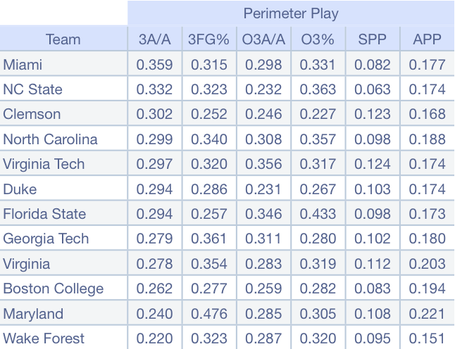