The Slow Decline of Duke

Share All sharing options for: The Slow Decline of Duke

Zeke Smith - best known for his pictures of Danny Green posterizing Greg Paulus and Mahktar Ndiaye at the national championship - has started a blog with his Duke alumnus brother about UNC and Duke, entitled Blue vs. Blue And it's quite good. One of their first posts was on the debate over how Krzyzewski uses his bench. The general consensus, and one I subscribe to, is that in recent years as the season progresses Duke uses less and less of their bench, whittling it down to a core six or seven people. Then by tournament time, the team is exhausted and underperforms. It's a criticism that's been kicked around for almost a decade, and Blue vs. Blue disagrees, but I'm not sure their focus on the three players getting the most minutes is the right way to look at things.

First of all, let's take a look at Duke's conference-only tempo-free stats going back to 1999. (I did the same thing for UNC last season, if you want another comparison.) 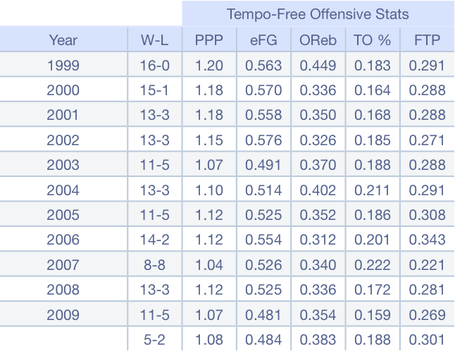 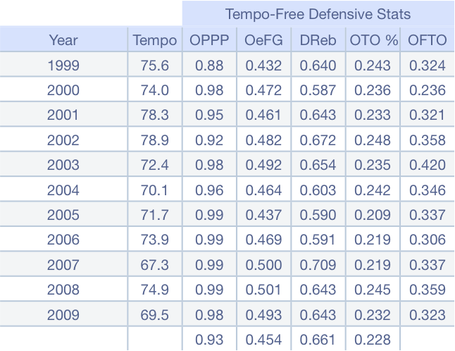 In some ways, this is going to be an unfortunate comparison for recent Duke teams, because it starts with the 1999 team, possibly the best team Krzyzewski has put together. It was the only season Elton Brand played without injury, but is was also the team that lost Brand, William Avery and Corey Maggette to the pros after the season. This was the first time Krzyzewski lost players prematurely he wasn't expecting to, so if his coaching or recruiting is going to change this is a good place to start.

For the next three seasons, Duke kept up the rapid tempo that they'd always played at, and pretty much had the same offensive performance as well. The defense slipped a little, and cost the Blue Devils in a couple of tournament games, but statistically the teams looked similar. But they did it with a lot fewer players. Take a look at the cumulative minutes of the 6th, 7th and 8th men for Duke - a better comparison than the top 3: 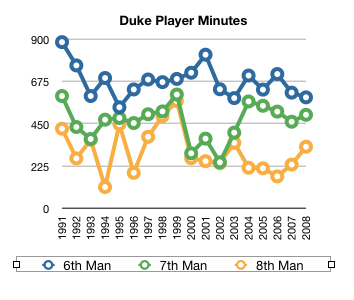 Beginning with the 2000 team, the playing minutes for the seventh and eighth men drop precipitously; Duke was playing for all intents and purposes a six-man rotation for those three seasons. That continued into 2003, but the talent wasn't their to keep the performance up. Even with a weak ACC conference - four teams made the tournament that season - Duke dropped five games and saw their second worst offensive performance of the decade.
Krzyzewski then changes his strategy, alternating between an average and an incredibly slow pace, and sacrificing some defensive performance to keep the offense going. The rotation settles in at seven, and with the exception of Josh McRoberts' final season before he, too, leaves unexpectedly for the pros, rebounding became a low priority. This season is turning out a lot like the last one, with the same slow tempo, but for the first time in a decade they're trying to move away from the perimeter-oriented play of the last decade: 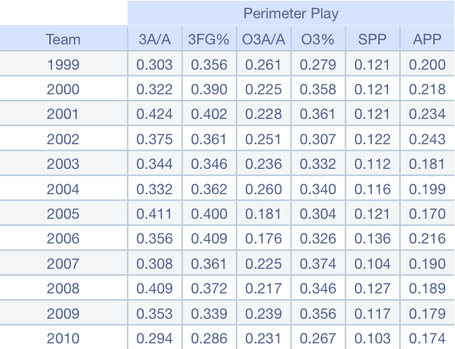 This means less three-point attempts (and buckets) and less steals, with a greater emphasis on getting Miles Plumlee and Brian Zoubek significant playing time and rebounds. In some ways, this is Krzyzewski trying to return to the style of lay of the '90's, and I think within a few years this debate over bench time will fade away. This season won't be that return, however. The pace is still slow to cover for Duke's depth weaknesses, and the shooting is upto the standards Duke likes to set. The early talk about a Blue Devil Final Four was incredibly premature, and Duke will struggle to get past the Sweet Sixteen this season.

Of course, that doesn't mean they can't handle Carolina. More on that tomorrow.