A Crash Course in the Rhode Island Rams

Share All sharing options for: A Crash Course in the Rhode Island Rams

There are nine teams who have played Carolina more than once with winning records against the Heels. A couple are basketball powerhouses, like Georgetown and Indiana. One's vying for the national championship this weekend. (It's not who you think; Carolina is 0-5 against West Virginia.) And one is Rhode Island, last seen getting blown out by 45 points by the 1993 National Championship team. So what have they been up to lately?

Following a similar trajectory to UNC, actually. The Rams started out strong, going 12-1 out of conference and getting quality wins over Boston College and Oklahoma State. The Atlantic-10 was rougher on Rhode Island; they went 0-5 against the NCAA tournament teams of the conference and finished the regular season losing five of their last seven. They've turned it on in the postseason, picking up the pace and having only one game go down to the wire, against Nevada.

Rhode Island starts three seniors and two juniors, and they play like it. They hardly ever turn the ball over, and they have the second most efficient offense in the Atlantic-10. They shoot smartly and well, not relying on a barrage of threes like most of the Heels' NIT opponents. On defense, they don't foul and prefer to get their stops with turnovers. That hasn't worked particularly well, and is the main reason the Rams finished tied for fourth in the conference. But Carolina hasn't kept their hands on the ball this season. If their habit of coughing it up returns, it'll be a short stay in New York.

If Carolina can get their entry passes in, however, things should go well. The Rams' main big men are Delroy James and Will Martell, but both are more likely to go for the block than the defensive rebound. UNC should be able to overwhelm them with height and get their points on the offensive end. The good news defensively is that there's no one player expected to bury the Heels with early threes. The freshman Akeem Richmond is the most prolific shooter from behind the arc, but he'll come off the bench. The other shooters are Keith Cothran and again Delroy James, who was 5 of 7 from three against Nevada. Both would rather drive than pull up and shoot. If Carolina can stop the dribble penetration, I'd like their chances a lot better.

But all of this is skirting around the real issue. The University of Rhode Island wants to be Carolina. A mobbed-up Carolina – seriously, the state is probably the biggest bastion of the mafia – but Carolina nonetheless. They call their team color Keaney Blue, which is basically Carolina blue with the serial numbers filed off. (Frank Keaney was the basketball coach from 1920 to 1948, and he didn't invent a color.) They picked the ram as a mascot, after Jack Merritt had already earned that nickname at UNC, and didn't acquire a live mascot until after Rameses was already grazing on Kenan grass. And even more mysterious is this line in their Wikipedia article:

There has not been a live ram at the school since the accident in 1974. It was replaced with "Rhody", a student in an anthropomorphic ram costume, who can be seen roaming the sidelines in his place. 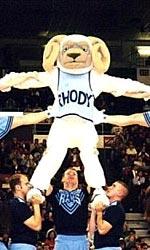 I have no idea what this accident may or may not be, but it must have been horrific, since Rhody is the most miserable thing I've ever seen.

And then there's the fight song. Here are the words, guess the tune:

These bastards have to be stopped. At least Oklahoma has the decency to admit they lifted Tag from us; these folks are just monsters.

Monsters with what looks like a seriously depressed ram.