Ed Davis, James McAdoo, and the Perils of Looking Ahead

Share All sharing options for: Ed Davis, James McAdoo, and the Perils of Looking Ahead

If you've been following my Twitter feed – and God help you if you are – you're aware I spent the last week in South Bend for work. Which means I saw the most important sports events of the week from an on-campus bar; Landon Donovan's injury time goal against Algeria at lunch, John Isner collapsing in relief after winning the 188th game of a match at lunch the net day, and Ed Davis's selection by the Toronto Raptors one evening when we were holed up as tornados menaced the area. Also, I got to see where they store Lou Holtz in the offseason, lacquered up to keep him from spoiling: 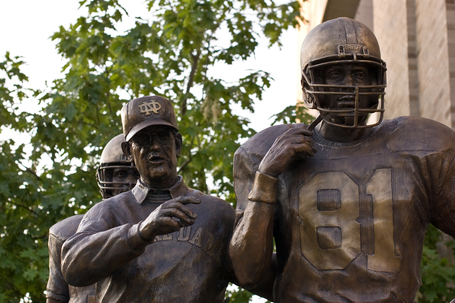 But now that I've puled myself away from the campus bar (which had a surprisingly good beer selection, but awful mixed drinks), I can devote a little more time to Ed Davis. Probably the most perceptive thing I read about him pre-draft was this Basketball Prospectus article that equated every draftee with another pro of the last ten years. Davis was paired with... Cedric Simmons, the N.C. State power forward who bumped around the league for three seasons, playing in 32 games over the last two. I know Davis has a more optimistic take on how things will turn out, but it was rare last season to see him truly play with a competitive fire, and I don't know how he'll do in the more unstructured NBA. Especially on a team like Toronto, who isn't expected to be all that successful to begin with.

As for James McAdoo, the 2011 recruit who flirted with coming to Chapel Hill before sensibly deciding to play his senior year of high school, I can't say I'm disappointed. I didn't write anything about it when the rumor was going around in part because I had nothing to add ("Here's a rumor. Is it true? I dunno. Is it a good thing? I dunno." Blogging gold!) but mostly because it seemed wrong to insert my opinions into a seventeen year-old's life choices. McAdoo will only be a better player after his senior season, and Carolina will do just fine next season with who they have. There's no reason to be constantly rushing things.

Case in point, analysis of the 2011 NBA Draft. Not quite as dumb as Bracketology in April, but only just. The most commonly used phrase in Parrish's ten profiles – even he can't come up with anything to write about the other twenty – is "right from the start." Why? Because he's profiling eight college freshmen. That he did it three days after writing a column on the perils of labeling high school stars is just proof he thinks irony is something thats kind of like an iron. Look, there's an entire season of basketball at a level none of these guys have ever played at between now and the next draft, but why focus on that? No, column inches don't fill themselves, after all. Sportswriters need to stop criticizing players for looking ahead and leaving school early, becuase they do the exact same thing. They just do it for a lot less cash.