A Look Back as Kenan Fieldhouse Comes Down

Share All sharing options for: A Look Back as Kenan Fieldhouse Comes Down

Tomorrow morning they'll start tearing down the Kenan Fieldhouse, the building that abutted the east end zone since 1927. It was from there that ESPN College Game Day filmed from when undefeated UNC and FSU met in 1997, and where student-athletes have been hitting the books and weights since time immemorial. The top floor was also used a lot for various campus functions; I know there are various photos around of me looking ridiculous in that building that will not be appearing on this blog. The fieldhouse will be replaced with The Carolina Center for Excellence, five stories of presumably excellent things, as well as club seats, suites, and a second video board. Besides some grumbling from the local papers – there is a recession, after all – most everyone's excited. I'll miss the old building, but there won't be any gnashing of teeth and rending of garments over it.

It does remind me, however, of something I stumbled across a couple of months ago, and threw in a scanner: 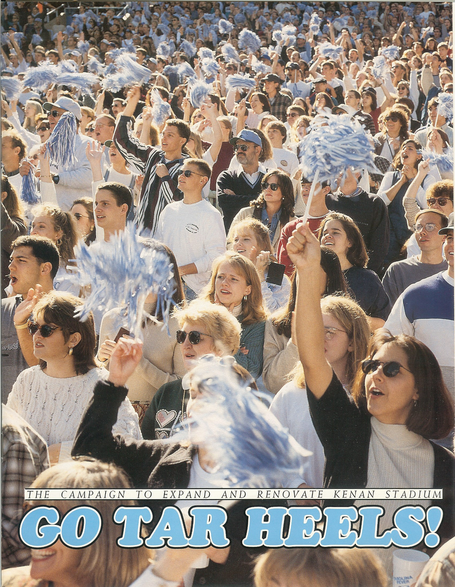 Yep, it's the fundraising mailing for the last Kenan Stadium expansion, in the mid-90's, under Mack Brown. (Yes kids, that's how folks used to dress back then, in oversized, unflattering  white T-shirts. Man, my youth was devoid of eye candy.) It was mostly filled with artistic renderings of what would soon rise in the west end zone, that turned out to be pretty accurate. 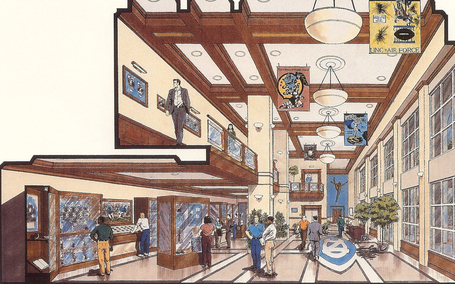 They were, of course, slightly off in the number of visitors in casual slacks, however. On more scan, to tempt you into opening that '90's-era checkbook: 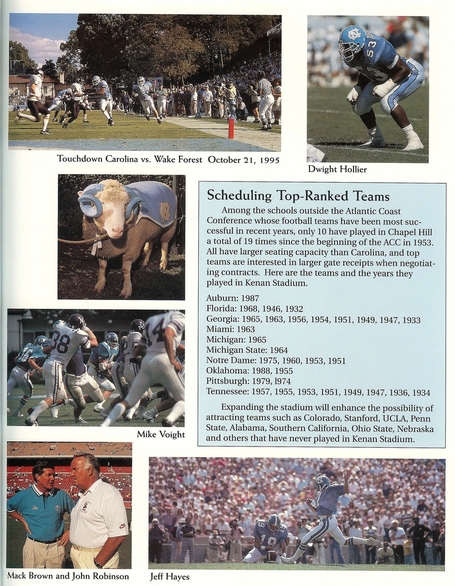 "Expanding the stadium will enhance the possibility of attracting teams such as Colorado, Stanford, UCLA, Penn State, Alabama, Southern Caifornia, Ohio State, Nebraska, and others that have never played in Kenan Stadium." Since that was written, only Stanford from among those teams has travelled to Chapel Hill, and only Notre Dame and Pittsburgh from the list above that one have returned. Maybe this building will do a better job. You can watch it go up over the next fifteen months here.