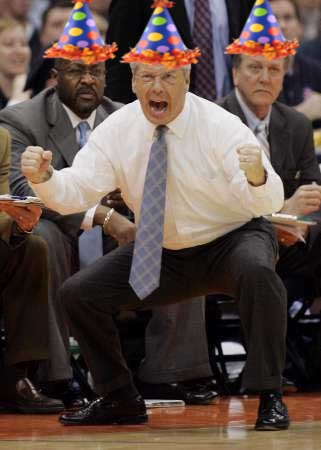 As you can see Roy Williams and his staff are totally jacked up to be celebrating THF's fifth anniversary.

First of all, many thanks and my utmost gratitude to Doc and C.Michael. Not only have they raised the quality of content around here but their contributions have been a huge help to me, especially when the NCAA investigation was going on.

Just a quick look at the overall numbers:

Let's just say the past year has been very good in terms of THF's growth and visibility. It took almost four years and half years to reach one million hits which happened at the end of July, 2010. Since then THF has added almost half that traffic in just six months. That is a ton of growth to say the least.

Those numbers would not be possible if you, the readers, did not keep showing up to read what we write. Quality content brings quality readers and top notch comments. I still maintain THF readers are the smartest UNC fans on the internet. In that respect I think the overall success of this blog can be owed in part to the contributors but also to the readers who drive the discussion to that higher level.

So, thank you to the regular readers and anyone else who has had a part in making this blog successful over the past five years.