It was an incredible shot by a freshman necessitated by poor play down the stretch. Yeah we'll take it because UNC now finishes no worse than second in the ACC and the Heels will play for the ACC regular season title on Saturday night.

So you have UNC, young as they are, going completely brain dead in the final minute. It starts with Kendall Marshall corralling a rebound in the corner following an FSU miss and UNC ahead three. FSU traps and Marshall fails to use one of UNC's FOUR FREAKING TIMEOUTS! Ahem. An FSU steal and layup by Derwin Kitchen makes it a one point game. The Heels come down and Dexter Strickland suddenly thinks he is Ty Lawson, tries to drive the lane and throws up a terrible shot giving FSU the ball. Kitchen then comes down, is fouled by Marshall and hits two free throws to give FSU a one point lead. So what should have been UNC running 20-30 seconds off protecting a three point lead turned into UNC down one with 18 seconds left. After Marshall had a layup blocked out of bounds with 11 seconds left, Roy calls timeout and this happens. 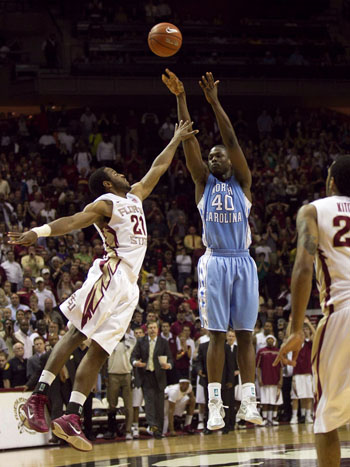 On Twitter, Doc said it was probably like Hoosiers in the huddle with Barnes looking at everyone a la Jimmy Chitwood and  saying "I'll make it."

If the way UNC played down the stretch with two dumb decisions within 30 seconds of each other bugged you, it should. This game like the one versus Boston College saw the Heels give the game away late only to be bailed out on the final play of the game. However, there is an upside. Usually players learn from these mistakes because they come in losses. In this case Roy Williams can use these situations to teach his players without the mess of having lost the game. I think the current pop culture catchphrase to employ here  is "Winning!"

As for the rest of the game, UNC played as well on the offensive end as they have in awhile which is saying something since Tyler Zeller had an off night. In fact the last time UNC was in Tallahassee, Tyler Hansbrough had his streak of double digit scoring games broken with a nine point performance. Zeller posted the same total tonight and was bothered by the length and physical nature of the FSU frontline. John Henson on the other hand was pissed off by the way FSU played to the point of getting hit with a technical foul along with FSU's Deividas Dulkys. I am not sure what has gotten into Henson but he has been playing with a mean streak of late. That is a good thing because this team needs someone with an edge and Henson is providing it. At this point Henson is quickly playing himself up the NBA Draft order scoring 19 points to lead UNC on a variety of offensive moves. The three blocks credited to Henson do not count the number of shots he altered.

Harrison Barnes had his typical game of scoring in spots and hitting a clutch shot when needed. Leslie McDonald came off the bench to hit three three pointers and score 10 points. Marshall dropped eight assists versus three turnovers and scored seven points. Marshall was 3-10 from the floor which needs to improve but overall if the offense plays like this with Zeller doing what he normally does, UNC is a very good team. The Heels shot 47% from the floor and hit 6-12 from three which is just the right number of attempts. The free throw shooting was a solid 14-18 and Henson has hit 10 of his last 11 free throw attempts. The 15 turnovers were problematic but UNC was able to get by being a tad sloppy. Oh and I the biggest plus of all, besides winning the game, is no Tar Heels were injured in the making of this win. If UNC can get out of Tallahassee with everyone's limbs attached, I call that a great night.

Looking at UNC's ACC season they started out poorly on offense followed by a stretch of games where they played well offensively. Then the offense checked out again. Now it appears the offense is trending upward again....just in time for the Duke game! Hey, how about that! UNC will now face Duke on Saturday night for all the ACC regular season marbles. Both teams are 13-2 in the ACC and the Heels are looking for a #2 seed in NCAA Tournament. More than that, UNC has lost three straight to Duke and is dire need of answering the Blue Devils in a meaningful way. Beating them in Chapel Hill to clinch the ACC regular season crown fits the bill nicely.