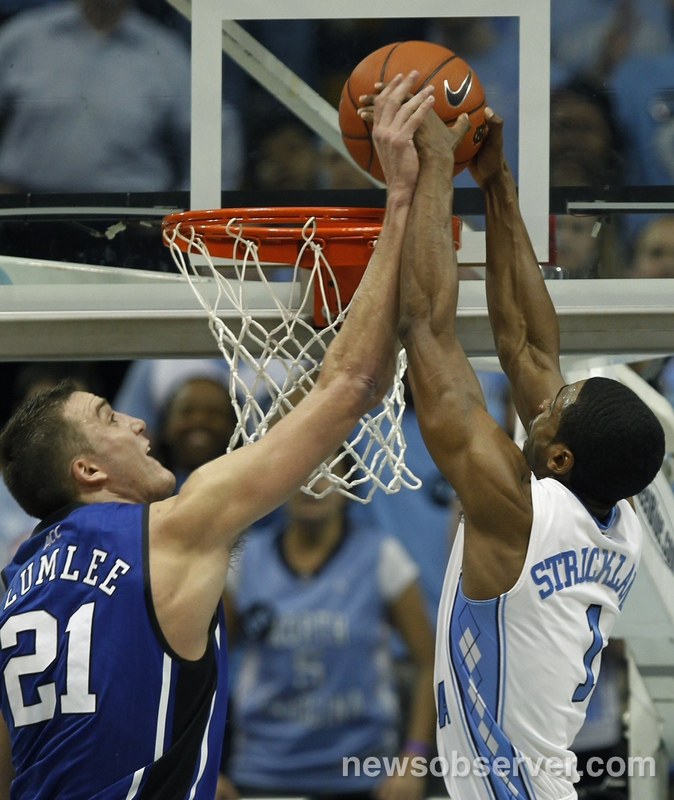 Do you remember how you felt a year ago on this night? It was abject misery to be a UNC fan. The Heels had been blown out of Durham with an effort that cannot be described in polite company. UNC finished the ACC regular season in 9th place at 5-11. The discussion among UNC fans was whether going to the NIT was even a good idea all things considered. It wasn't the worst season in recent memory but it was bitterly disappointing made worse by a Blue Devil run to a national title.

I don't know if what happened tonight completely erased all of that but it came pretty darn close. This game never felt uncomfortable for UNC. Roy Williams started Kendall Marshall with Justin Knox and three members of Blue Steel maintaining the UNC tradition of starting the seniors on Senior Day. Let's just say, he looks like a genius for it. After 1.5 minutes of player UNC led 3-0. Then came the starters who got down to work, played nip and tuck with Duke for awhile before opening up a 12 point halftime lead. The second half started the same way it did in Durham with Duke cutting the lead to five. That was as close as Duke would get the rest of the game. UNC moved the lead back out to double digits after which it was a yo-yo with Duke cutting the lead 4-6 points and UNC pushing it back out with a matching run. It was a balanced offensive attack with the Heels shooting 52% from the field and 4-9 from three. The only bug in the ointment was the 11-21 from the FT line, three of those misses coming from Tyler Zeller who is normally reliable at the line.

Where to begin? Probably best to start with Kendall Marshall who may have played one of his most complete game as a Tar Heel PG. Marshall went for 15 points and 11 assists and in doing so did all the things in Chapel Hill he failed to do in the first loss vs Duke. Marshall ran the offense, found open Tar Heels with precision passing in the half court and on the break. Marshall was also not afraid to take his shot when needed and go to the basket. During the first game, Marshall had chances to score and missed. That lack of production ultimately hurt UNC. Not this time, Marshall did everything you expected him to do including a spin move that left Seth Curry frozen in the lane. With Marshall scoring and dishing 11 assists it means the Heels had a balanced offensive attack.

Harrison Barnes finished up with 18 points and also did a nice job guarding Kyle Singler. In the first game he did the same job on defense but his scoring suffered. In this game, Barnes was aggressive in looking for his shot but not so much as to disrupt the offense. His seven made shot in 17 attempts all seem to come as just the right time. Tyler Zeller and John Henson did not necessarily have the type of games offensively they put together in the first game. Zeller ended up with 14 points and Henson had ten. Henson was big on the boards with a ninth straight double digit rebounding game pulling than 12. It is noteworthy that Duke spend nine fouls between the Plumlee brothers trying to guard the interior. It should be noted Justin Knox had five points and four rebounds in 19 minutes. UNC simply got balanced scoring accentuated by Leslie McDonald contributing nine points and Dexter Strickland had eight including a nice posterization of Miles Plumlee to turn out Duke's lights. In fact, Strickland may finally be understanding that his role on offense is to drive the basketball rather than shoot from the outside. The more Strickland can get into the lane and make good decisions the better UNC is.

On the defensive side, it is tough to tell how much of what happened was Duke being ice cold versus UNC's defense. I do know that if leaving Ryan Kelly wide open from three was part of the plan then Roy Williams is a genius. If it was a defensive lapse then UNC got a break he simply could not hit the shot. All things being equal, if you are going to have a defensive lapse it probably should be allowing a player like Kelly to be open than Nolan Smith or Kyler Singler. At least that used to be the case. Like the game in Durham, Duke relied heavily on Nolan Smith and Seth Curry to do most of the scoring. Singler missed a ton of shots but was also well defended at times by Barnes. Outside those three double figure scorers, Miles Plumlee had seven on putbacks or easy layups, Kelly scored two and no one else bother to contribute. So the answer, given Duke's now 0-3 record on the road versus the ACC top six is part of it was Tar Heel defense but it is likely more of it was a Duke offense in crisis.

After last season and the way things stood in early January, to see the Heels cutting down nets and sitting atop the ACC with a 14-2 record is like a dream. Before this season the biggest jump from the previous season's finish to outright first place in the ACC was Clemson going from 6th to 1st in 1989-90. UNC made the jump from ninth to 1st between 2010 and 2011. In UNC history there are not many Tar Heel teams who end up winning 14 games in league play. This 2011 team joins 1957, 1984, 1987, 1993, 2005, 2008 as the only UNC teams to win 14 ACC games in one season. This is the 15th time UNC has lost two or fewer games in ACC play. The Heels finish the season with an undefeated mark at home(15-0). UNC will be the #1 seed at the ACC Tournament in Greensboro next week playing the noon game on Friday. The remaining games on the ACC schedule will determine who will play for the right to meet UNC on Friday. Right now it could be one of NC State, Maryland, Miami or Virginia.

For now, enjoy this win and this incredible turnaround from last year's forgettable season.