UNC vs. Clemson: Beyond the Box

Share All sharing options for: UNC vs. Clemson: Beyond the Box

Harrison Barnes showed us why he will be the #1-pick in whichever NBA Draft he chooses to enter. Really, the analysis of this game is boils down to nothing more than the fact that Barnes was playing at a level far above any of the other nine players who were on the court with him, and that is why North Carolina won the game.

The defenses apparently decided to take the afternoon off.  Not only did both teams scorch the nets with eFG%s well over 50.0, but each was also able to grab a huge percentage of their misses (Clemson OR%: 41.7; UNC OR%: 47.4).  Neither team took great care of the ball, and while Clemson did do a much better job of capitalizing on Carolina's turnovers (27-15 advantage in points off turnovers), what really ended up separating the teams was the enormous advantage UNC had from the free throw line, as the Heels not only made it to the line far more frequently than the Tigers did (FTR: 54.8 - 24.2), but they also did a much better job of capitalizing (FT%: 70.6 - 56.3).

Beyond the Box Player of the Game

Before getting to the POG, let’s first take a look at the top five ORtgs for the Tar Heels (minimum possession percentage: 10% or minimum minutes percentage: 80.0):

As for the player of the game... 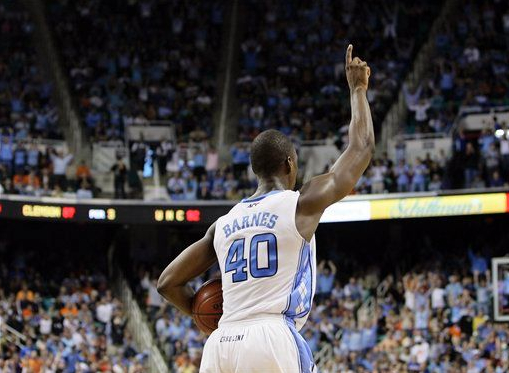 Beyond the Box Player of the Year

The BTB POY is based on a points system in which a player gets 10 points for being named the POG and 3 points for having a top five ORtg, with a 2 point bonus for having the top ORtg.

Tyler Zeller entered the the post-season with very sizable lead on the rest of the team, but two straight sublime-to-superhuman performances by Harrison Barnes have him now nipping at Tyler Zeller's Heels for the BTB POY honors.

Note: For reference, a full stats glossary can be found at StatSheet.com.