Share All sharing options for: In Case You Were Wondering How The Carrier Game Was Going To Work

We have artist's renditions on how the court will be setup for UNC's November 11th, 2011 game versus Michigan St. on the deck of an aircraft carrier in San Diego. 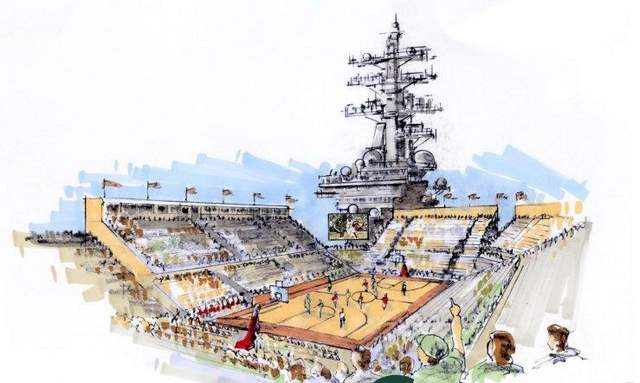 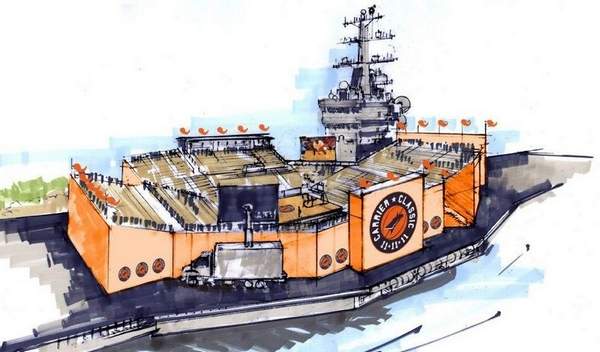 For obvious reasons, organizers won't know until much closer to the Nov. 11 game which aircraft carrier will serve as host. It probably will be the USS Ronald Reagan or the USS Carl Vinson, said Whalen, who's spent time in San Diego meeting with Navy officials.

A court and stadium seating for about 7,000 fans will be set up on the flight deck. In case of rain, the game will be moved below to the hangar deck, with bleacher seating for the fans.

Each school will get 750 tickets, 400 will go to coaches participating in a clinic and 1,000 will go to the Morale Entertainment Foundation and its partners: the Navy-Marine Corps Relief Society, Wounded Warrior Project and the San Diego Air & Space Museum.

Obviously seeing a visual on how this will work helps. My primary concern with playing basketball on the deck of an aircraft carrier docked in a coastal city was the wind which can be pretty persistent. It appears there will be enough structure surrounding the court to take the wind out of play. Of course maybe that's the real reason for the campus pickup games on outdoor courts. No, just kidding.

It should be an interesting game given UNC's history of abusing Michigan St. and the fact his is one of a possible three tough non-conference games away from Chapel Hill. UNC plays at Kentucky in 2011-12 and will likely draw Ohio St. in Columbus for the ACC-Big 10/11/12 Challenge.