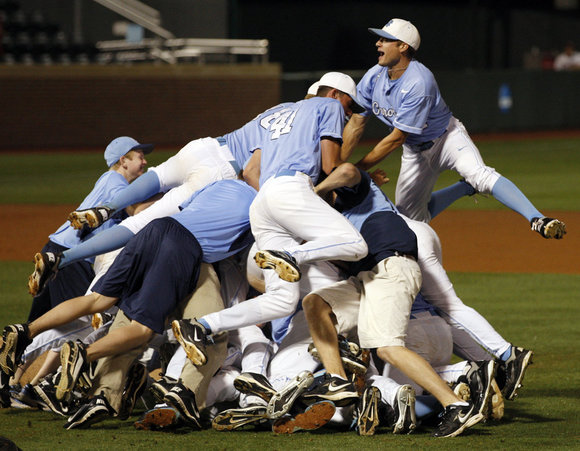 In what had to be one of the more bizarre starts and completion of a Super Regional game, UNC withstood a Stanford rally and endured a 3.5 hour rain delay to become the first team in 2011 to punch their ticket for the College World Series. It will be the fifth time in six seasons UNC will travel to Omaha in what has almost become a rite of spring in Chapel Hill. It is the ninth time in school history the Heels have advanced to the college baseball's pinnacle event.

This game could best be described as a roller coaster. UNC got off to shaky start with Kent Emanuel giving up a run in the 1st inning while throwing over 20 pitches. Emanuel ultimately settled down while the Tar Heel offense put together a pair of three run innings to take a 6-1 lead into 8th. In the 8th, Greg Holt had all sorts of issues in relief of Emanuel allowing three hits, a walk and run which left the bases loaded and UNC up 6-2. Michael Morin came in and battled with Stanford's Austin Wilson in a long at-bat that saw Wilson get the best of it with a bases clearing double to trim the Tar Heel lead to 6-5. Morin eventually got a double play to end the inning.

In the ninth UNC had Levi Michael on 3rd with two outs and Tommy Coyle at the plate facing a 2-1 count when the umpires called a weather delay. A line of thunderstorms were moving into the area(I was at the Durham Bulls game and left at 9 PM because of the rain.) What followed was a 3.5 hour rain delay that ended at 9:55 PM. After almost four hours of waiting, Coyle drew a walk and Jacob Stallings had his second RBI hit of the game adding an insurance run off Stanford MLB first round pick Chris Reed who retook the mound after the long delay. Mike Fox opted to do the same with Michael Morin, most likely because there was not much experience left in the bullpen and Morin has been that good all season. I don't know what UNC was doing during the rain delay but Morin came out throwing some absolutely filthy stuff. Morin struck out the first two Cardinal batters he faced and induced the 4-3 ground out to send the Heels to Omaha.

The win over Stanford was the 50th of the season for the Diamond Heels, a nice milestone we do not see all that often. All things considered this UNC team is not like the past versions of Tar Heel CWS teams under Mike Fox. This is a gutty team who cobbles together little rallies, responds to the opposing team and gets just enough great pitching to get the job done. UNC does not wow you as an offensive juggernaut nor is the pitching one to catch your eye apart from Patrick Johnson, Emanuel and Morin. Of the five UNC teams to make the CWS this one might be the most satisfying to watch. Lower expectations tend to do that because without that pressure both the team and the fans cherish the journey more.

The question is can the most unlikely of the five Fox coached CWS teams be the one that finally gets the job done? We will find out next week in Omaha.