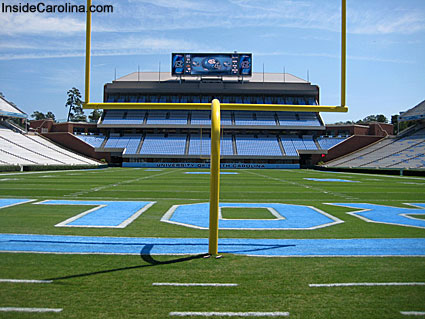 UNC kicks of the 2011 season on Saturday at 3:30 PM versus James Madison. After a tumultuous opening to training camp, it has pretty much been all football during the month of August which is a major relief from what we all went through a year ago.

Interim head coach Everett Withers took his first ride on the radio show train Wednesday night which was also Jones Angell's first time hosting the show as UNC primary play-by-play announcer. Inside Carolina has a full rundown on quotes here. Withers said he thinks the strengths of the team lies with the offensive and defensive lines but the inexperience of the secondary will be a concern.

The best news, at this point, is UNC is looking at a mostly healthy roster. CB Jabari Price is out until probably the ECU game and TB Gio Bernard will play with padding on his hand. Outside of that, UNC is in a great position health wise. Hopefully it stays that way.