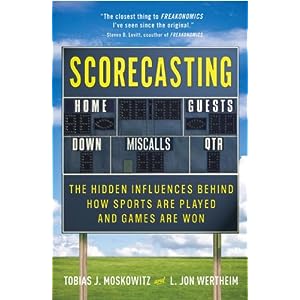 There's a good example of how big the book Freakonomics by Stephen Dubner and Steven Levitt simply in the location where I picked it up: late one sleepless night in a Mumbai apartment I was staying at over Christmas, 2007. This was a couple of years after the book had first come out, true, but it was a juggernaut, launching an entire field of small-scale economics applied to various questions of life. So with the awkwardly named Scorecasting: The Hidden Influences Behind How Sports Are Played and Games Are Won, it's no surprise to see sports get the Freakonomics treatment. And that's part of the problem.

This book, which the publicity team was kind enough to send me, hews to the Freakonomics blueprint pretty closely. It's written by a fellow professor of Levitt's at the University of Chicago, Tobias Moskowitz, and Sports Illustrated reporter L. Jon Wertheim. The book was titled by the same consultant who came up with Freakonomics, gets a cover blurb from Levitt (calling it the closest thing to his own book written since) and is drawn mainly from research papers from Moskowitz or other economists in the same field.

Unfortunately for the authors, if you've been around the sports blogging world for a decent length of time, you've probably heard of most of the shocking conclusions: NFL coaches should go for it on fourth down. Refs swallow their whistles in the closing moments of close games. There's no such thing as hot or cold streaks in shooting. Icing kickers doesn't really work, and everyone is governed by loss aversion, loss aversion, loss aversion. For the latter, it even pulls the same Duke basketball ticket experiment from Dan Ariely's Predictably Irrational, another book of the genre that sits half-finished on my bookshelf. I have serious issues with the conclusions of that particular experiment, which I should really spell out in a separate post.

So the book suffers from repackaging a lot of things I already know. It also pads itself with more than a few four and five page chapters of little merit, the most egregious one arguing that the team who wins the coin toss almost always win an NFL overtime, possibly the least shocking bit of news ever put to print. The book basically has two sections going for it. The first is the long middle section on the home field advantage, which pretty thoroughly debunks most of the standard reasons – stress of travel, the home crowd, the vagaries of various baseball parks – to arrive at the conclusion that it's almost always the result of crowd pressure on the officials. (They do allow that scheduling of patsies on the college level contributes, but for the most part blame all those phantom charges Duke gets on cheating.)

The second, even more fascinating part of the book worth reading, discusses how Jerry Jones' purchase of the Dallas Cowboys completely revolutionized – and standardized – the draft-day trade. It's hilarious, and the authors get the money quote from one executive, "We're all using this document that a buddy of Jerry Jones put together using picks in the late eighties? Now that you put it like that, it's probably not so smart." That chapter alone is almost worth the price of admission; perhaps it's merely because I hadn't heard this part before, and it's incredibly commonly told. But even so, it comes across as much more exciting than the rest of the book. More like this and less of the same old thing would make this a much better book to me.

The bottom line is, if you really like Freakonomics, you'll probably like this book. If you're a sports fan, a fan of numbers, and not someone who has followed every blog link to every academic paper out there, you'll also probably really enjoy it. I am neither of these people, however, and so this book annoyed me more often than it interested. The writing could be repetitive, and some of the chapters as cliche as arguments they're refuting, but there's some good work here. If it's your thing, go ahead and pick it up.