I don't make it down to Kenan Stadium very much anymore. I live just far enough away where I have to devote an entire weekend to the trip, and life doesn't leave me with that many free weekends. In fact, I was in Chapel Hill for something else entirely this past weekend, but it also gave me the opportunity to catch my first game since last year's loss to Virginia Tech. So here are some thoughts on the current state of the stadium and the fans inhabiting it.

After Miami scored to go up I tweeted this photo of the crowds still filing in: 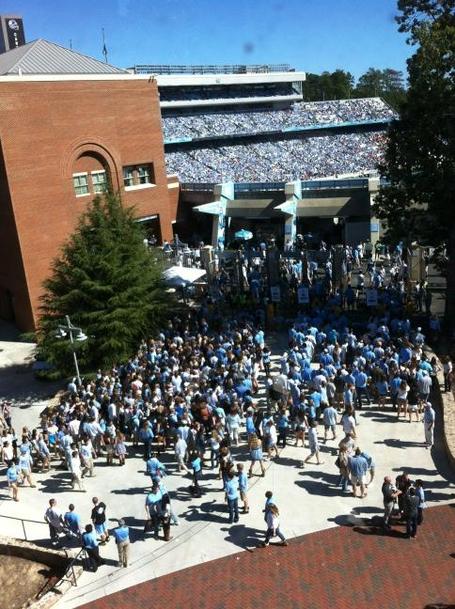 Of course, this was taken from the stairs of the Bell Tower lot, meaning I too had yet to make it to the game. My excuse was a 16-mile training run that morning, but I'm sure most of the folks in that scrum had perfectly good reasons as well. The downside is that yes, there were a lot of empty bleachers early on. UNC somewhat punishes itself by placing the least desirable portion of the student section – sections 110 and 111 – in easy view of the television cameras and tweeting press members. It does fill up during the game, however.

The same can't be said about the Blue Zone, the other oft-mocked empty portion of the stadium. Of course, these are premium, fund-raising seats going for between $750 and $2000 for a seven-game season. I'm rather surprised they're selling as well as they are, since the recent trend across most sports has been for these types of seats to lie fallow. (The seats also don't strike me as very good, food and drinks aside, but I don't really like watching a game from behind the uprights.)

My section of the stadium was pretty vocal, but in an angry-at-the-world kind of way. Renner drew calls of frustration, the refs were a personal affront to all that was holy, and the News & Observer got a smattering of boos when it was announced as a sponsor of something. On the other hand, it did have a guy wearing these pants: 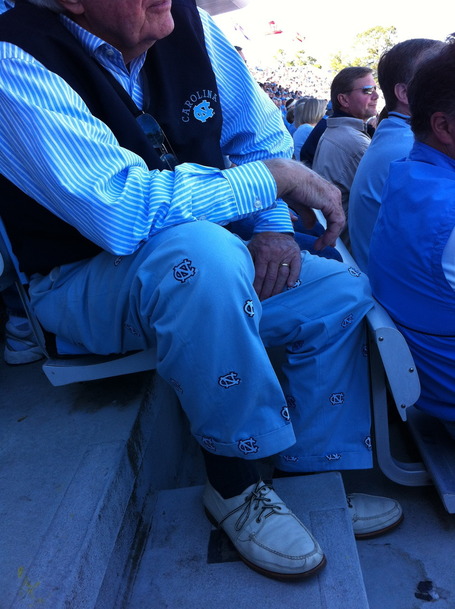 The fiancée has forbade me from getting these pants.

Yes, the crowd did disperse to half their size after the failed fourth down attempt, but to be honest, that made the game more fun. Rattling empty bleachers after Carolina recovered the onside kick, and the general atmosphere of "can you believe this is happening?" was more fun in a half-empty stadium, and I think the pride of sticking around actually amped up the folks that remained. It made the anticlimactic ending all the worse, however, with no attempts at the end zone, just a sack and a strange little last-second play that never looked like it had a chance to succeed.

All in all, it was a perfect day for football, even though we were treated to a less-than-perfect performance on the field. There's a unique atmosphere to Kenan that still pervades, despite the recent additions, and although it's nothing like what happens in a lot of Southern football schools, is the experience I grew up with, and I wouldn't trade it for anybody else's. I wouldn't mind a few more wins, though.