Bernard, 1000 Yards And Other Stats

Share All sharing options for: Bernard, 1000 Yards And Other Stats

Consider this your Gio Bernard Quest for 1000 Yards Update.

On Saturday night, Bernard became the first Tar Heel since Natrone Means in 1992 to string together three straight 100-yard rushing games. That brings Bernard's total for the season to 548 yards rushing or 109.6 yards per game. That rushing average is good for third in the ACC and 19th in the country. Bernard is also the leading freshman rusher in the nation averaging 2.6 yards per game more than Bowling Green's Anthon Samuel. The game versus ECU constituted Bernard's heaviest workload to date when he carried the ball 24 times which excluded a huge chunk of time in the 2nd quarter after he scored his seventh TD of the season. On the year Bernard is averaging 15.6 attempts per game resulting in a 7.03 yards per carry average. Bernard's pursuit of 1000 yards stands in very good shape. With seven games left Bernard needs 452 yards to reach the 1000 yard plateau or  64.5 yards per game. Barring injury or some massive breakdown in the offense, Bernard should get 1000 yards and then some.

Here is a quick look at some other Tar Heels' stats five games into the season.

Dwight Jones is presently ranked second in the ACC in receiving yards per game at 102.8 and receptions with 33. Jones' 514 yards leads all ACC receivers and he is tied for first with Clemson's Sammy Watkins in receiving touchdowns. In the national rankings, Jones' 102 ypg is good enough for 23rd overall. He is 18th in receptions, 12th in total receiving yards and tied for 3rd in receiving touchdowns. In other words, Jones has been as advertised through five games and allow me to again point out, he does so without drawing unsportsmanlike penalties. Jones simply takes care of business and at times does it in spectacular fashion. 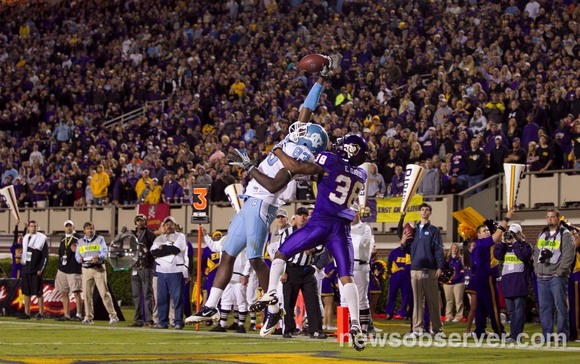 As for the guy throwing the ball to Jones, Bryn Renner is putting together a nice season through five games. Renner is sixth in the ACC in passing yards per game with 225.4 which speaks to UNC's balanced attack. If you have a back like Bernard and a receiver like Jones you should go to both of them equally and UNC seems to be doing that. Renner is first in the ACC in completion percentage at 75.7% and 2nd with a QB rating of 179.10. Renner's 11 touchdown passes is good for third in the league. The only bugaboo so far has been the interceptions which has him next to last with six. On the national level Renner is 50th in yards per game and tied for 21st in touchdown passes(with Stanford's Andrew Luck.) Speaking of the highly touted Luck, Renner's QB rating is slightly better good for fifth overall and in completion percentage Renner is second in the nation. Renner's is also getting 9.8 yards per attempt which puts him at seventh.

All of this points to a Tar Heel offense that has the weapons to move the ball on the ground and in the air. This offense can become even more dangerous if we continue to see Erik Highsmith and Jhay Boyd make contributions to take the pressure off Jones. Now, if someone could just figure out how to get the secondary fixed.