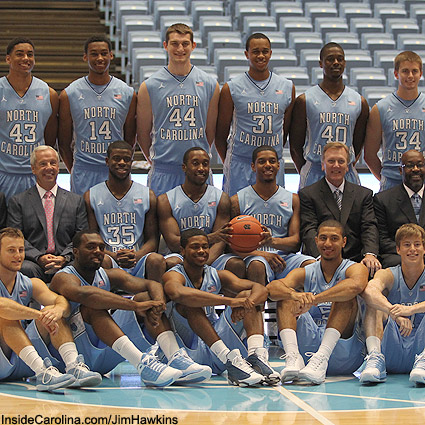 Inside Carolina has you best rundown of quotes from Roy Williams and multiple players. Per Dean Smith's original rule, the freshmen were not available to speak with the media and will not be until November 11th after UNC plays Michigan State in the Carrier Classic.

Roy's remarks to the media covered everything from expectations, comparisons to the 2005 and 2009 as well as the development of players like Reggie Bullock. Roy was asked about conference expansion and in classic Roy fashioned he said he wasn't paying attention to how the schedule and divisions would ultimately be fleshed out.

That will draw some criticism from some as not caring or being out of touch with an extremely important issue unlike Duke's Mike Krzyzewski who offered all sorts of opinions on the matter. The way it sounded to me Roy is simply not getting to deep into how the ACC will handle new members until it actually happens and the conference is done expanding. Roy said they pay John Swofford a very good salary to deal with these concerns so he has his focus on his team. In short, Roy probably will have plenty to say about how expansion plays out when it actually plays out.

Late Night With Roy is Friday evening with the doors opening at 4 PM followed by a volleyball game and then the festivities. In all likelihood LNWR will be attended by newly hired UNC AD Bubba Cunningham.