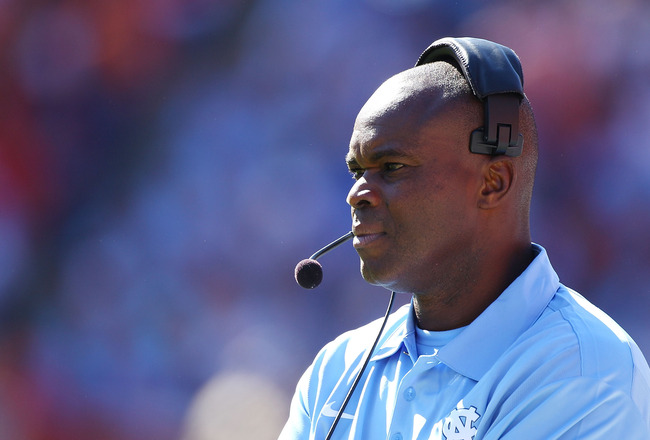 At 1 PM today UNC will introduce Larry Fedora as the 37th football coach in school history bringing to an end the "Butch Davis era." Lost in the shuffle of today's announcement is the man who, on July 28th, was thrust into the position of interim head coach a mere week before the players reported for training camp. When Chancellor Holden Thorp fired Butch Davis, it set off a massive backlash in the fan base. Some of it was a sycophantic devotion to Davis. Some of it was reaction to Thorp's handling of the firing from the timing to the disastrous press conference that followed. Over a year of NCAA investigations and routine castigation by the media had taken its toll on everyone involved from the university administration down to the lowliest fan on the message board. The UNC football program was already on the brink. In the opinion of many, Thorp's decision pushed it over the edge into irrelevancy.

With such a shocking change a week before practice opened, the fear was a team that would immediately fall into a death spiral. College athletes in any sport are young men heavily invested emotionally, sometimes to volatile levels. They also have an almost familial loyalty to their coaches. Having their head coach removed from his job in that proximity to the start of the season had the potential of destabilizing the team in a way that could bring the season crashing down before it began. Amid these concerns, outgoing AD Dick Baddour turned the reins of the team over the defensive coordinator Everett Withers.

Withers, with no head coaching experience, was placed in one of the more unenviable position any coach could find himself in. From the start he did so with a positive outlook and a passion for his players and the school itself. It was Withers' job to keep the train on the tracks so to speak. On the cusp of an NCAA Committee of Infractions hearing and eventual penalties, the last thing the program needed was a losing season in football to deepen hole any further. Withers ensured that did not happen. By no means was it perfect. There were slight missteps along the way from giving Butch Davis the game ball following the opening win over James Madison to verbally sparring with NC State's Tom O'Brien over academics before having his Tar Heel team mail it in versus the Wolfpack. The circumstances surrounding Withers and the football program were far from ideal as was the way some of the games unfolded. However, I am hard pressed to believe that even with Butch Davis at the helm this team ends up marginally better than 7-5. This was still Davis' team and staff. Maybe the team in general would have been more focused at times under Davis, maybe not. The comparison really doesn't matter. What does is Withers took on a situation that could have ended very badly and salvaged a respectable season. As best he could, he recruited players and represented the program amid turmoil we hopefully will never see again in Chapel Hill. Withers did so without complaining and with the an upbeat attitude.

Everett Withers will have one more game as the Tar Heel head coach versus Missouri in the Independence Bowl and beyond that his future is unclear. Hopefully he lands a nice job either as a coordinator or head coach somewhere else. While some fans were never happy with Withers' schemes and playcalling on defense, the way he carried himself was top notch. As we turn the page on this troublesome period of Tar Heel football let's take a moment to recognize the man who, for one season, did his part to pull the program back from the brink. The job Larry Fedora faces is a challenging one but I would like to think it is a little less so because Withers' kept the program on course, if only for one season.