Share All sharing options for: Roy Williams' Record Against Other ACC Coaches

With Saturday'a win over Boston College, UNC has finished their games against this year's freshman coaching class of the ACC, barring meetings in the tournament. And it's gone pretty well for the Heels, as they're 5-0 against new coaches in the conference. That, plus a game last weekend where Gary Williams had Maryland running a full press most f the game, got me wondering how Roy Williams has performed against the other coaches in the ACC. So I whipped up the following table, which encompasses all of his conference games since arriving at North Carolina. Perhaps I'll go back and add in the Kansas games against Duke, Mayland and Georgia Tech, but for now I'll just focus on the games in Carolina blue. 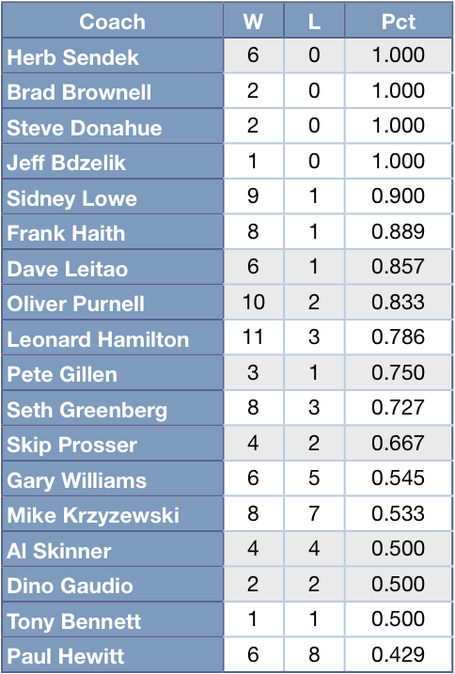 The first thing that leaps out at you is that performing well against UNC is not a good way to guarantee job security. Fired coaches (marked with gray on their records) are two of the four guys to do 50% or better against Roy Williams, and the guy with the greatest success against the Heels is likely to be fired after this season. Beyond that, it's no surprise that Gary Williams and Mike Krzyzewski have both done well, as they're both 650+ win coaches who either are or will be in the Basketball Hall of Fame. Otherwise, this just goes to show you how futile Miami and N.C. State have been against the Tar Heels. State fans will especially be sore, as their coaches posses two of the longest losing streaks against UNC, Herb Sendek's six and Sidney Lowe's nine. Don't worry, Wolfpack fans. There's a name on this list I really believe you should consider for your upcoming coaching vacancy. But more on that later.