How Much Effect Do the Cameron Crazies Have on a Duke Game?

Share All sharing options for: How Much Effect Do the Cameron Crazies Have on a Duke Game?

This was originally written for the 2011 season, but is pretty relevant today.

This Wednesday UNC travels to Durham to play Duke, and we all know what that means – we get to suffer through a host of paeans from the media to Cameron Indoor Stadium. Sportswriters love to talk about the cramped, poorly-cooled building and the idiots who inhabit it. They'll wax for hours about how students camp out for weeks under the harsh conditions of catered food and T1-wired lampposts, solely for the chance to yell epithets at opposing teams. Expect countless mentions about how much of an advantage they give Duke, and how brutal the conditions are for Carolina players. And just pray they don't do another feature on the guy in the Speedo – there are impressionable children watching this game, after all.

It's true, Cameron is pretty miserable – especially for sportswriters. They stick Dick Vitale somewhere in the rafters (smart!), and all of the press guys in the floor seats have Duke students right over their shoulder, a fate I woudn't wish on anyone. But the players are on the court, not in the crowd, and are focused on the 94 by 54 foot space where the game is played. So it's time to ask, outside the creation of the "Airball!" chant in the 70's, have the Cameron Crazies had any effect on the game?

As I mentioned when I reviewed Scorecasting a few weeks ago, economist Tobias Moskowitz, and Sports Illustrated reporter L. Jon Wertheim spent a good deal of time looking into the possible sources of the home court advantage. And they came up with a pretty good way of measuring the effect of the crowd on the players. I'll let them explain:

How do we isolate the crowd effect from all these other potential influences on the player? We need to look at an area of the game divorced from all these factors, such as free throws. Free throws are an isolated interaction between one player – the shooter – and the crowd that is trying to distract and heckle him.

Over the last two decades in the NBA, including more than 23,000 games, the free throw percentage of visiting teams is 75.9 percent and that of the home team is ... 75.9 percent – identical even to the right of the decimal point. Are the shooting percentages any different at different points of the game, say, during the fourth quarter or in overtime, when the score is tied? No.

But that's the NBA, with cavernous coliseums and prime seats filled with celebrities and corporate fat cats. That's nothing compared to the confines of Cameron Indoor. These are some of our brightest young minds, yelling things. And occasionally donning swimwear. This place practically makes Dick Vitale priapistic – surely, visiting teams quail in the face of such adversity, right? 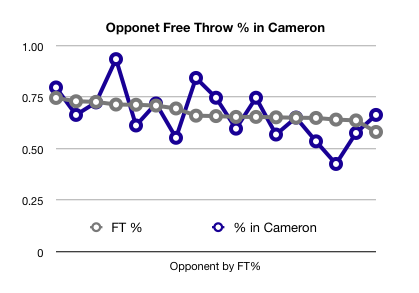 Here's a plot of the free throw percentages for Duke's home opponents last year, both for the entire season and for the game against the Blue Devils. The data for the game in Cameron is a bit noisy, but out of 17 home games, nine Duke opponents shot worse and eight shot better from the line than they typically did. It's a complete wash. Free throw shooting just isn't affected by the Cameron Crazies. Speedo guy can go ahead and put some pants on.

The authors of Scorecasting eventually came to the conclusion that the home court advantage, across all sports, stems from one thing and one thing only – unconscious bias on the part of the referees. They're likely to shade close calls in one direction to ease the mob of unruly fans behind them, and the effect is worse in the closing minutes of tight games. This too, we can measure, albeit indirectly: 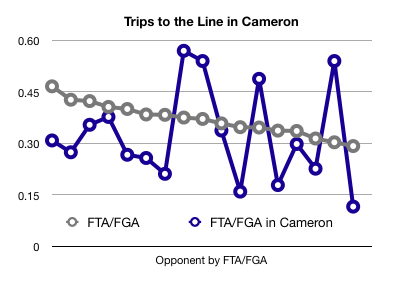 This is the ratio of free throw attempts to field goal attempts for Duke's opponents, again for the entire season and for the game in Cameron. (We're using tempo-free stats here because the number of fouls in a game is going to be dependent on how many possessions there are in that game.) And in all but four games, Duke's opponents go to the free throw line significantly less than they typically do. And here's the thing about those four games, of which I'll point out one was against North Carolina – the number of shots taken were all under 50. So it's more a case of the denominator being unusually low than the Blue Devils suddenly becoming foul-happy.

But, you might be thinking, perhaps this is only because Duke doesn't foul very much. OK, you're probably not thinking that if you watched more than a few ACC games – instead you're screaming expletives about hand-checking and phantom charges – but let's entertain the idea anyway. Duke did win the national championship last year; did Mike Krzyzewski, Leader Who Happens to Coach™ instruct his team in the fine art of playing without fouling? 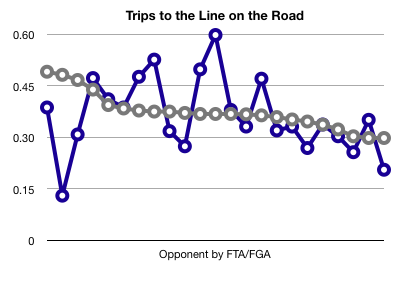 Not a chance. Away from Cameron, Duke's opponents draw fouls just as often as they do everywhere else. In 24 games the Blue Devils played away from Durham, 12 times they sent the other team to the line more often than usual, and twelve times they fouled less. (That huge differential in the second team from the left? That's the tournament game against Arkansas-Pine Bluff. No surprise there that Duke didn't really have to foul.) And in case you're wondering, in the game in Chapel Hill, UNC went to the line less than usual. It happens.

So there you have it. The Cameron Crazies have no effect on the other team, but significant effect on the refs. Still, I'm sure it gives them a much better advantage than say, the cheese-and-wine crowd of the Dean Dome, right? Well again, free throw shooting isn't influenced by the crowd – 8 teams shot better and 10 shot worse from the line last season in Chapel Hill – but what about trips to the line?

You'd think UNC fans rattle the refs even more, as only one team, Florida State, went to the line more often than normal while in Chapel Hill. And as much as I'd like to credit Carolina Fever for changing the game more than the Cameron Crazies, I can't; the trend holds on the road as well. The Tar Heels did foul opponents less than almost every other team in the country last season, as only the powerhouses of Siena and South Dakota sent teams to the line less often. Feel free to call it mass manipulation of the refs if you'd like; it's really the style of defense Carolina plays. They're third in this category this year as well.

So keep this all in mind when you're watching the game this Wednesday. Duke students will be yelling the same uninspired taunts they have for years at Tar Heel players, and now you know the effect it will have on them – absolutely nil. It's still Hansbrough Indoor Stadium to Carolina fans and players, and all the Speedos in the world aren't going to do anything more than buy the Blue Devils a few extra hand checks. I hope the camping was worth it, folks.