UNC's Path Through the East Regional

Share All sharing options for: UNC's Path Through the East Regional

As soon as all four regions were announced, the general consensus was that North Carolina's is by far the toughest. Not only do they get the overall number one seed, Ohio State, but there's probably no team that's not underseeded until at least Xavier, if not Villanova. This region is going to be brutal, so let's take a look at it and then break it down: 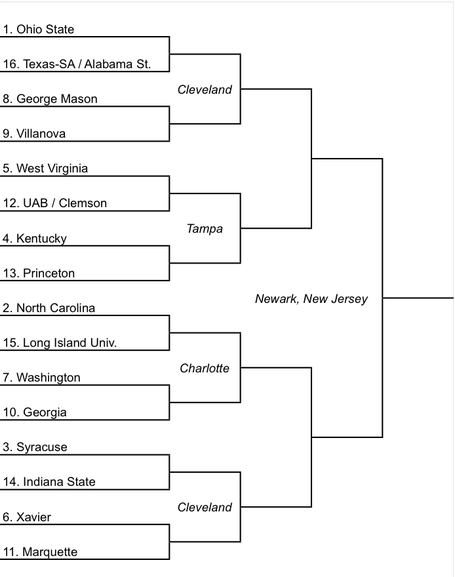 If there's one thing to be said for this bracket, it's that the double-digit seeds are pretty weak, so chalk should come close to holding in the first round. The East region has two of the most complained about teams in the tournament – Georgia, the SEC also-ran who got in ahead of Alabama, and UAB, the worst at-large team altogether. If Clemson doesn't win the Tuesday game in Dayton, it's a huge blow to the ACC's already tattered reputation. But the Tigers are closing strong, and shouldn't have any difficulties.

This leaves three first round games – I don't care how the NCAA wants to define things, the Thursday/Friday games are the first round – where an upset is possible. Xavier and Marquette are both big, bruising teams who eschew three pointers in favor of points in the paint. The differences are that the Musketeers are more prone to fouling than the Golden Eagles, and that while the former has coasted through the Atlantic-10 winning 15 of their last 16, Marquette has been beaten down by Big East play, going only .500 in conference. That being said, I like Marquette here, and I'm pretty skeptical of their conference in general.

George Mason and Villanova should in theory be a close game, but it won't. Villanova's in free fall, having lost their last five, and last beating a tournament team the first week of February. George Mason, meanwhile as solidly worked their way through their conference schedule, and look likely to move on. Unless the Wildcats get unusually hot from outside, the Patriots are going to advance.

West Virginia and Clemson are two very similar teams, both defensive-oriented, slow and very aggressive at defending the three. The difference is that the Tigers are stronger on the interior, and able to play fast when the game calls for it. The Tigers don't have a big win under their bets this season, and here's a prime chance to change that.

After the jump, how I think everything will play out beyond the first round.

Let's take a look at who's making the Sweet Sixteen. Ohio State is a given. Syracuse can easily handle either their conference-mate Marquette or Xavier. Kentucky is under-seeded at a four, and although I can see them having a lot of trouble with Clemson – I'm rather bullish on the Tigers – although they'll have more luck with the Mountaineers. Either way they should soldier through.
That leaves Carolina and Washington. The Huskies can give the Heels trouble; Isaiah Thomas is great at both distributing the ball and taking the tough shot. He's also got Matthew Bryan-Amaning inside to get them lots of points. The Huskies rebound well, and although UNC has a height advantage at most spots on the floor, if they don't pull out of the funk they were mired in this weekend, it'll be a brief postseason.
But lets assume Carolina can take advantage of the Charlotte crowd and get to the second week. If they face the Orangemen, a more experienced team that runs a vicious zone defense. They were also, until an overtime loss to UConn in the Big East tournament, on a six-game winning streak. I have serious trouble seeing how the Tar Heels win this game. The defense is designed to give UNC fits, heavy on steals and leading the nation in blocked shots, and the offense, although not as impressive, is still plenty for Carolina to handle. Unless they can really run against Syracuse and play without the mental errors that have plagued them, here's where UNC goes home.
That leaves Ohio State and Kentucky. The Wildcats are very annoyed with their four seed, especially in light of Florida being named a two, but they went 2-6 on the road in the SEC. They're playing better of late, but they don't have the experience to beat the Buckeyes. And in the regional finals, well, Syracuse is good but Ohio State is one of the two best teams in the country. They can shoot over the Orangemen zone, they don't turn the ball over, and they have he defensive prowess to keep Syracuse in check. OSU is a young team, and that may be what trips them up, but they play with poise, so it's not likely. Odds are, Ohio State cuts down the nets coming out of this region and heads to Houston.

Yep, we've got someone willing to pay to have they're name above this post as well. They'd like you to spend a little more time slacking off from work, and here's what they want us to tell you:

Ever wish that more things worked like college brackets? That you could seed everything that way? Top 64 pre-game foods. Top 64 college players. Well, now you can do just that with your friends, with the Allstate BFF Brackets, which takes your 64 top Facebook friends (an algorithm seeds them based on interaction) and seeds them in four regions, exactly like the real tourney. Once the tourney starts, your friends advance with the corresponding seeds – till one is left standing. Check it out at http://apps.facebook.com/bffbrackets/