UNC Beating Duke, the Morning After

Share All sharing options for: UNC Beating Duke, the Morning After

Twelve hours later, it still feels good. UNC handled Duke incredibly well, limiting almost all their scoring to two players and leaving the Blue Devils perplexed in postgame interviews. Krzyzewski chalked it up to simply missing open looks, and Duke did have their worse shooting night since the Florida State game, but it was more how many threes the Blue Devils were forced to attempt – again, the most since the Seminoles loss. Duke had no interior presence, a point Nolan Smith obliquely referred to with his, "We didn't get the overall team effort."

Before the game, there was a fair amount of focus on the ACC season assist title race between Kendall Marshall and Smith. Both had 157 coming into the game – Smith having played one extra game, trailed slightly – and Marshall just blew him away, dishing out eleven to the Duke player's three. That all but sews up the title, an incredible feat for a player with much fewer minutes on the season than Smith.

In other record-chasing news, John Henson's lone block last night gave him 94 on the season, the second-best total in UNC history. The record belongs to Brendan Haywood, and stands at 120. That mark will probably stand, but Henson is already ninth on list for career blocks at UNC with 152, and could concievably pass such names as Danny Green (155), Rasheed Wallace (156), Scott Williams (161) and Eric Montross (169) before the season ends.

As for the ACC Tournament, Carolina's one seed means they'll face the winner of Thursday's 8/9 game. A Miami win today over Georgia Tech would create a three-way tie at the seven spot between the Hurricanes, Maryland and Virginia at 7-9. Miami being undefeated against both schools would take seventh, leaving UNC to face the winner of Maryland/Virginia. A Hurricanes loss puts Miami in 9th, and Maryland, by virtue of a win over Florida State, in 7th. The Heels would face the winner of Miami/Virginia.

The other debate that was rocketing over Twitter last night concerned the Heels storming the court following the win. This has become an internet trend over the last few years; nary a post-game celebration goes by without some one sitting in judgement of it, puling out an arcane list of stupid rules (and everyone has their own) about what is and is not worthy. The conclusion is always that UNC should not do so, and the calls to "Act like you've been there before" rain down.

Well, I have been there before, and I don't give a damn what you think.

Big wins result in excited fans, and excited fans storm the court. UNC just capped a remarkable season-turn around, beat their archrival, and took home the regular season ACC championship. It wasn't their first. It won't be their last. But it was a dismantling of a team the media couldn't stop rhapsodizing about all season, it was a Saturday night, and if Tar Heels fans want to take to the hardwood, it's appropriate. I've stormed the court of a twenty-four point blowout: (Duke was ranked number 1, UNC number 2, it was a blowout, and it was fabulous.)

We've stormed Kenan. And we did it ironically, and for three straight games. (It was the nineties, and rather hard to explain.) This is basketball, and this is what college students do. The celebrate, they storm the floor. Do you know what you call someone who turns their nose up at that, and writes precious little rules about what is and isn't appropriate? You call them Rick Reilly. You jackasses are Rick Reilly, and you leech the fun out of sports. You like Bill Rafferty for random vegetables he might yell, rather than his analysis. You're more concerned with the accoutrements and the memes of the sport rather than the actual game. And we don't really care what you might think.

But if you're getting grief from Duke fans this week about the students' postgame antics, just hit 'em with this: 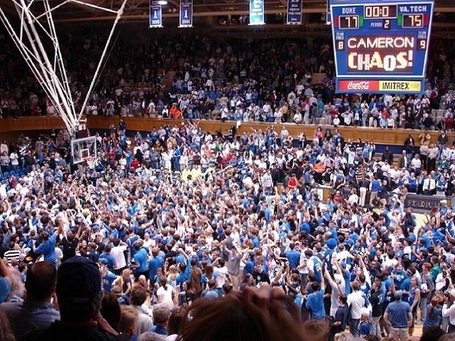 Those are Duke students, all over the hallowed court, after beating Virginia Tech in 2005. (Sean Dockery hit a three from 40 feet away to win. Tech was 4-12 in the ACC that season. And yes, I mocked them at the time. But because they needed a last second shot to beat the Hokies – I don't care what a bunch of Jerseyites do after the fact.)