Going back to 2006, I've taken a look every August at the collective non-conference schedule of the ACC football teams. Over that time, we've basically seen games drift to two poles of opponents, the big name – typically from the SEC – and the FCS school, with less games going to the non-BCS schools of D1-A. Last year there were a good deal of complaints about the ACC's scheduling tanking the conference in the early weeks, so are we going to see a shift back to the middle in the coming years?

Overall the ACC has inched towards a more exciting schedule. There are seven opponents ranked in the preseason, which seems about right for a conference that could only put two there itself. #1 Oklahoma is facing #5 Florida State,as will #23 Florida; #6 Stanford will destroy Duke, #12 South Carolina and #19 Auburn will meet Clemson, #16 Ohio State has a decent chance of being beat by Miami, and #22 Georgia will probably handle Georgia Tech.

As for the truly embarrassing schedules, State's comes to mind, with its double-dip into the FCS and no team stronger than Cincy. But I truly shudder at Virginia Tech. They're the other ranked team outside of FSU, contenders for the ACC Championship, and they schedule East Carolina, Marshall, Arkansas State, and Appalachian State? The Hokies could go undefeated – they won't – and not make the national championship. Instead, we'd be subjected to weeks of analysis about how weak the ACC conference is. Of course, it is Tech, so possibly App State will knock them off or something.

Below the jump, a graphical representation of the last six seasons, plus a friendly message from the Marines. 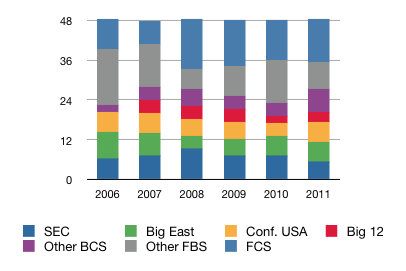