On Thursday night at Virginia Tech, UNC's frontline  spent the better part of the evening returning shots to the sender. The Heels tallied nine blocks on the night, six from John Henson, two from Tyler Zeller and one from Harrison Barnes on a Dorenzo Hudson three pointer. With Henson this sort of thing is commonplace but every once in awhile there is an opposing player who thinks he can simply walk into the lane and put up a shot against Henson not fully grasping the length of Henson's reach. The two most famous examples of this are current NCSU player C.J. Leslie and former Pack guard Ryan Harrow. Both had their "Meet John Henson" moments last season. In the case of Leslie, Henson actually got into his head to the point he was worthless playing against UNC. The latest member of the Meet John Henson Club is Virginia Tech's C.J. Barksdale who posted Henson up in the first half, decided to shoot the ball then this happened(via the N&O) 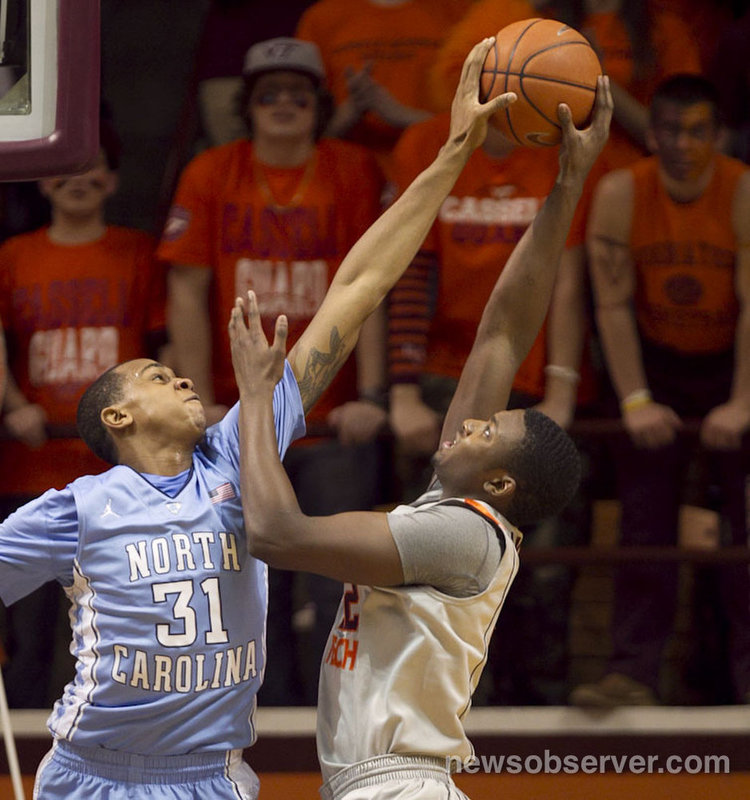 Barksdale recovered the ball after the block and must have thought it would be a good idea to try again. Now, you've all heard the definition of insanity which is doing the same thing over and over while expecting a different result. Clearly Barksdale qualifies as being insane because his second shot attempt was blocked also. He was never heard from again.

As impressive as that was, the Tyler Zeller block of Robert Brown actually topped it(via Inside Carolina) 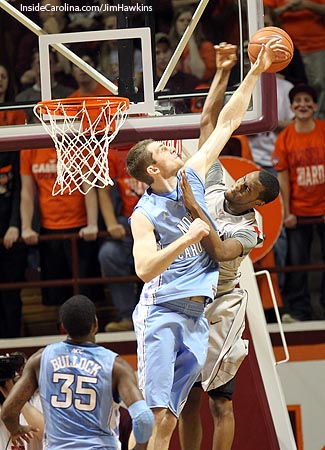 Brown is 6-5 and has shown the ability to posterize opposing players in the past. On Thursday night he drove into the lane with the intention of doing the same to Zeller. The UNC senior was having none of it and made a spectacular block when you take into account Zeller had to jump up and block the ball out of Brown's hand in midflight. It was a "not in my house" kind of play. It was also a key moment in the game. Virginia Tech was up by four at the time and a spectacular dunk over UNC's center would have sent the Cassell Coliseum crowd into a frenzy. Instead Zeller corralled the rebound and five seconds later P.J. Hairston nailed a three.

In the past two games, Zeller has been much more active going after opposing players shots around the basket. He is not generally known as a shot blocker but Zeller showed last night he is not some stiff who cannot make defensive plays. Roy Williams already hailed Zeller has the best defensive player on the team for his understanding of the defense and the number of charges he takes. If you add some consistent shot blocking to his resume, that only makes him better.