Danny Green Getting It Done in San Antonio

Share All sharing options for: Danny Green Getting It Done in San Antonio

After toiling in relative NBA obscurity in Cleveland for his first two years in the league, former UNC standout Danny Green is making a name for himself as a key contributor for the San Antonio Spurs.

With all-world wing player Manu Ginobli injured, Green has had the opportunity to see significant minutes off the bench. According to Tim Griffin of the San Antonio Express-News:

During Ginobili’s absence, Green has emerged as the Spurs’ top wing off the bench. He’s given them outside shooting, a fierce defensive effort and moxie when they’ve needed  it. His emergence has been the biggest surprise of the season.

Outside shooting, defense, and moxie. Sounds like just the kinds of things he brought to the Tar Heels, especially during the 2009 national championship run.

With UNC playing three games in six days, Roy Williams gave the team the day off on Wednesday and flew to San Antonio to watch Green and the Spurs take on Houston.  Again, Tim Griffin reports:

“All of our guys in the NBA, whether it’s from Kansas or North Carolina, I try to see during the course of the year,” Williams said. “Danny I haven’t seen. He was with Cleveland two years ago and I went up to see him and he played like one minute.

“He’s a little more important here in San Antonio and he’s doing some nice things and Pop is one of my favorite guys in the whole wide world. We played three games in six days and I gave them a day off today so we could come and see Danny.”

Williams said he’s not surprised with the development of Green, who has blossomed as a consistent producer for the Spurs after Manu Ginobili’s injury.

“Danny is one of those of kids who has the ability to play, “Williams said. “But in the NBA you have to find the right spot and be there at the right time and take advantage of it. I think that’s what Danny’s done.

“He’s always had an ability to score. He’s a little sneaky and has the ability to block a shot and get some steals and an offensive rebound for you. He’s a good  basketball  player who was crucial for us in ’09 when we won the national championship.

It's great to hear that Green, a fan favorite, is making the most of his opportunity. And, like at UNC when he was known to make a highlight reel or two, Green is continuing the tradition for the Spurs, as evidenced here.

And of course, it wouldn't be a post about Danny Green without this: 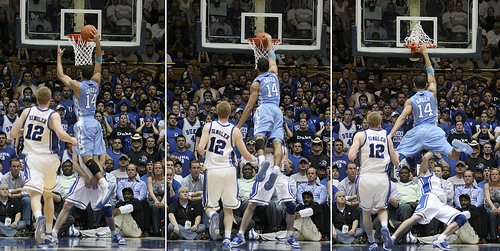