The smell of fax toner, the warmth of the page as it comes off the roller, the rush coaches feel when seeing that scrawled signature of an 18 year old kid and of course fans cursing the names of high school football players while others hail them as the greatest player since Joe Montana.

UNC signed 23 players(two less than the max due to self imposed limits) to the 2012 recruiting class, the first under head coach Larry Fedora. Overall the class is getting decent reviews. Scout.com has it ranked sixth in the ACC and 40th overall which is good all things considered. In that past year, which is when most of the legwork is done putting a recruiting class together the NCAA dropped the notice of allegations, Butch Davis was fired, the team was run by an interim head coach who didn't know is he would get the job, UNC hired a new coach who brought in a new staff that didn't really get the ball rolling until late December and the NCAA still has not issued a final report. Having the NCAA's hammer hanging over the program is burden enough to deal with in recruiting as is changing coaches. UNC has dealt with both at the same time which is going to take a toll. Any view of this class is taken with those factors in mind.

Overall, UNC got some good players but none that are necessarily "big fish" unless you count Gatorade South Carolina player of the year WR Quinshad Davis who announced his commitment today. Greensboro QB James Summers switched his commitment from NC State to UNC last week and joins Kanler Coker to fill out the QB depth chart which was hit by Patton Robinson's decommitment and Braden Hansen's transfer. OG Caleb Peterson, who had offers from several SEC schools, followed Fedora from Southern Miss to UNC.

You can get a full rundown of the new Tar Heels here. Also check out the commit list at Inside Carolina for more information on the UNC signees.

Aside from the recruiting class, the most interesting item coming from Larry Fedora might be this(via @Inside Carolina) 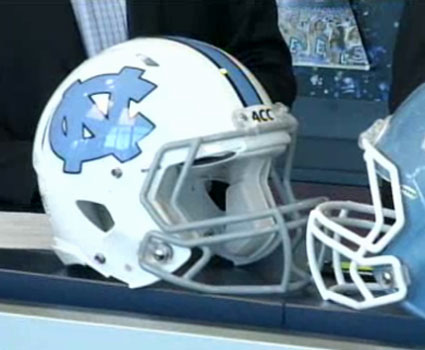 The white helmet has been discussed before but Fedora hinted that it might actually happen in 2012. Of course the helmet is like the recruiting class. Yes, it looks nice but what I want to see is UNC players with whatever helmet they choose playing smart football and winning games. The helmets and the commit lists are nice, now let's see the coaching staff do something with them.