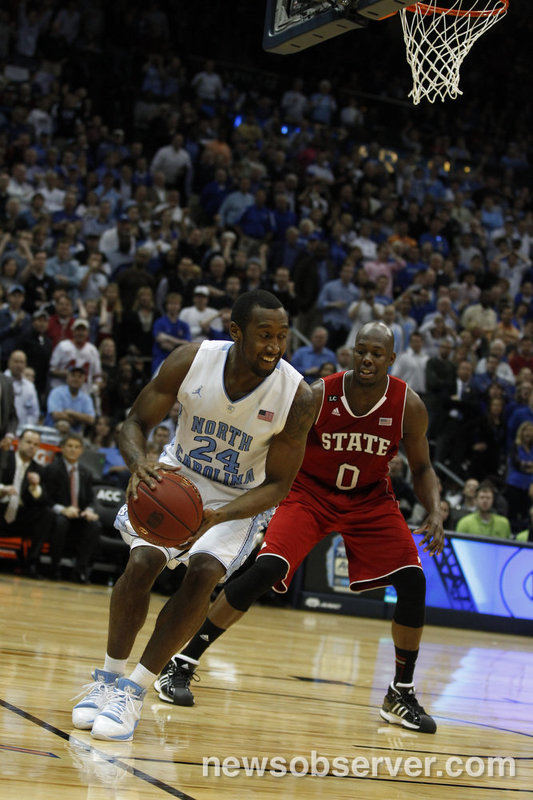 When Justin Watts came to UNC it was to fill an open slot left when Alex Stepheson returned home to California to be closer to his ailing father. I don't know what Roy Williams envisioned when he brought Watts into the Tar Heel program but through most of four years Watts impact on most Tar Heel games was almost nonexistent.

Therein lies the great tension. For all the benefits Watts enjoys such as being a member of UNC's team, getting a full ride and wearing an NCAA championship ring, the senior guard also knows his role is limited. Watts plays sparingly and when he does play, it mostly for his play on the defensive end. Individual offense is not a strong suit for Watts but he does hold his own on defense. Still, this is a kid who willingly came to UNC knowing that his ceiling as an ACC player was already pretty low. He has been at UNC four years knowing a long parade of players will always roll past him.

Despite Watts' position on the team he has never done anything but work hard. During this season, Watts has become a leader for his younger teammates and more than that bought completely in to everything Roy Williams is doing. He understands the game plans and what Roy Williams is looking for. That is why he sees minutes despite the perception he may not deserve them. Doing everything that is asked of you and executing the defense means a lot to Roy Williams. As a result we see Watts on the floor. We may not agree with it but play he does often with a quiet line in the box score.

That is until Saturday in the ACC Tournament where Watts played power forward and point guard in the same game. Called on to do whatever he could to help the team Watts filled the role in admirable fashion. In close games the little things are magnified and his steal at the end of the game to save a potential game tying layup is nearly as important as the shot Kendall Marshall hit to take the lead. Tossing the ball deep into the backcourt to waste as much time as possible is exactly the kind of savvy play you expect a senior to make.

I don't know where this game fits into the annals of great UNC games but should the Heels win an ACC Championship on Sunday, Watt's game saving steal in the semifinals will be a huge reason why.