McAdoo Weighing His Options and Harrison Barnes in a Hyperbaric Chamber?

Share All sharing options for: McAdoo Weighing His Options and Harrison Barnes in a Hyperbaric Chamber?

Inside Carolina spoke with James Michael McAdoo's father, Ronnie about his son's plans for next season. At present it looks like McAdoo will return but is still evaluating.

“James is coming home this weekend and we’re going to sit down and just look at the pros and cons and weigh his options right now,” the elder McAdoo said in a phone interview. “I know a lot of these mock drafts have him at No. 6 and No. 7 and in the top-10.

“Right now, our intentions and his intention is to be at Carolina next year.”

McAdoo said he was “not sure” if his son would meet with UNC head coach Roy Williams to acquire information from NBA personnel.

McAdoo's stock took off when he filled in for John Henson during the ACC Tournament then played big off the bench in four NCAA Tournament games. He led UNC with 15 points versus Kansas and showed a lot of versatility in his game. Right now it looks like he will return but nothing is certain until UNC makes it official.

As for Kendall Marshall, John Henson and Harrison Barnes, there are some strong indications(the kind that can be found paying Scout.com $11 a month) out there all three will enter the NBA Draft. Official word of their decision could come soon which would be very quick as compared to the way this process has been handled in the past under Roy Williams.

Speaking of Barnes, this photo showed up on Instagram(which Barnes uses) earlier today. 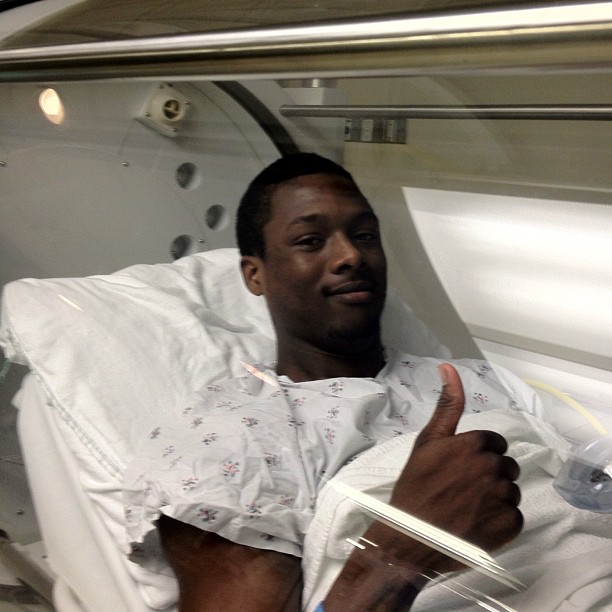 If I had to guess, Barnes is sitting in a hyperbaric chamber which is used to accelerate the healing process for injuries by delivering higher levels of oxygen.

The obvious conclusion that jumps out at you(assuming the timestamp is correct) is that Barnes was indeed struggling with an injury of some sort. Other than that, I have no idea and neither does UNC associate AD for communications Steve Kirschner.  If Barnes was injured that would explain a great many things such as the lack of explosions and multiple shots being short. It would also make this team possibly the most snakebit, injury ridden team in UNC history.

@jen_daniels spoke to HBarnes at FB prac today. He said he's just banged up from a long season - hence the hyperbaric. no specific injury.

So there you have it.