Roy Has Some Pointed Words For Digger Phelps

Share All sharing options for: Roy Has Some Pointed Words For Digger Phelps

How crazy has the postgame hype surrounding UNC's win over Duke on Saturday? No one is talking about Roy Williams' postgame press conference where he singles out former Notre Dame coach and current ESPN analyst Digger Phelps for going apoplectic over UNC players(P.J. Hairston mainly) going under screens in the first game. Here is the video via WRAL. The money part comes at the 4:50 mark through the end of the video. It starts with Roy calling out everyone who doubted them after the FSU and Duke losses before he rips Phelps.

Phelps was not totally off base in his analysis just really annoying. Besides we can all get behind some ritual Digger Phelps abuse any time it occurs.

Also noteworthy from the press conference is Roy's description of Tyler Zeller prior to the game. He said Zeller did not crack a smile during warmups. Chris sent along this screencap from just before tip off. Zeller has as cold blooded a look on his face as you can possibly have despite the fact the Cameron Crazies were chanting "MVP" and "you let the whole team down" at him. 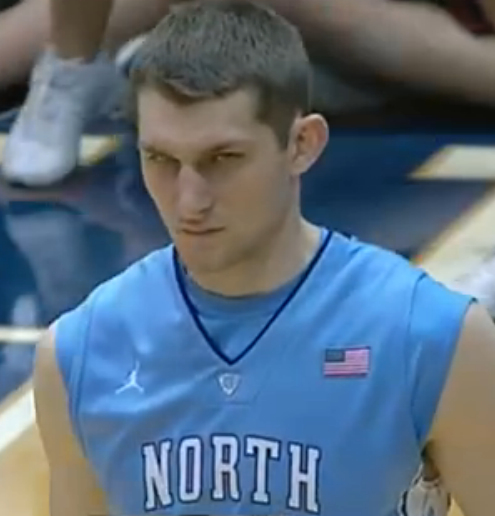 During the introductions when Duke showed a video montage that included the Austin Rivers game winner, it was noted on Twitter that Zeller simply sat there staring straight ahead and sipping Gatorade. Or maybe it was blood. Whatever the case, Zeller came to lay waste to Duke's senior night and that he did along with his teammates.