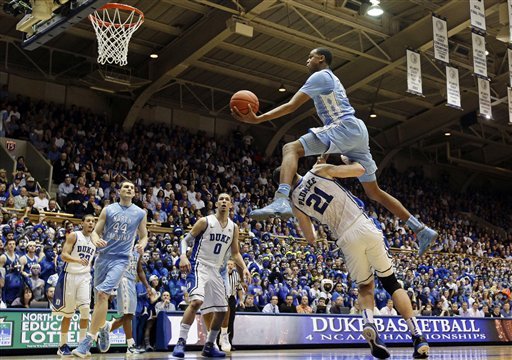 In a word it was a reckoning.

After listening for over three weeks about the first game in Chapel Hill and Duke's improbable rally, what every UNC fan wanted as an angry, focused team to take the Blue Devils behind the woodshed. UNC did that by opening up a 24 point lead in the first half then pushing back on a couple of 2nd half Duke runs to ultimately win by 18. Yes, there were nervous moments late in the second half when Duke managed to cut the lead to 11 with Austin Rivers shooting FTs to make it single digits. Rivers missed and UNC was able to squash any hope Duke had left sending thousands of students home without a win after spending seven weeks in a tent.

In short this was a tremendous team performance. On the defensive end, UNC made a concerted effort to guard the perimeter and was willing to  open up the interior for the Plumlees some rather than let Duke rain threes. In the first game Duke shot 36 three pointers hitting 14 of them. Tonight, Duke only put up 22 3PA and hit eight of them. There were some open looks but the biggest adjustment was UNC using the hedge to really force the Duke shooters further away from the line. The gamble there was it left Duke big men open heading toward the basket but each time John Henson, Tyler Zeller and James Michael McAdoo managed to recover after effectively disrupting the screen. UNC did give up points in the paint and saw Zeller get into foul trouble however once the UNC lead hit 20+ all that was needed was trading twos with the Devils to keep the game under control.

On offense, Kendall Marshall says you can take that "overrated" talk and shove it where the sun doesn't shine. For a second time against a local rival, Marshall went on the road and posted a double-double. Marshall not only scored 20 points and handed out 10 assists but there were multiple times UNC needed a big shot, Marshall hit it including a foot on the line two late in the second half which pretty much sealed the deal. In addition to Marshall's play, Reggie Bullock got it going offensively with 12 points. Harrison Barnes was good at times, forced some shots but nailed a dagger three pointer late. Then there was the tag team champions of the ACC on the interior. Tyler Zeller did his usual work on the interior but when he got into foul trouble in the 2nd half, Henson turned his offensive game up hitting an array of jumpers for 13 points and 10 boards. At the end of the day, Zeller solidified his ACC Player of the Year award with 19 points and 10 rebounds.

UNC will head into the ACC Tournament as the #1 seed and still fighting for a #1 seed in the NCAA Tournament. Of course that may not matter. If this team shows up in the NCAA Tournament, being a #1 or #2 will not matter. This team, the way it played versus Duke, is right there with Kentucky as a contender for the national title. There is an "if" attached to that. This cannot be a one game peak but rather the game that kicked off the run to a title. Only subsequent games will bear that out but as Kendall Marshall likes to tweet let's live in the moment of a big win over Duke and ACC regular season title.