Share All sharing options for: Update on Kendall Marshall

UPDATE: Official release from UNC says surgery was successful and Marshall had a screw inserted into the scaphoid bone and his status for Friday is unknown.

Here is how things stand as of this afternoon with much of this information coming from Dennis Marshall via Twitter and CBS Sports.

Kendall Marshall has successful surgery on his right wrist this morning where they inserted a screw into the fractured scaphoid bone. The procedure took 30 minutes and according to the senior Marshall, it went as well as could be expected. He also indicated there was a positive prognosis and told CBS Sports Jeff Goodman via text to "Hang onto your seatbelt." Here are the tweets pertaining to Marshall on his father's account. 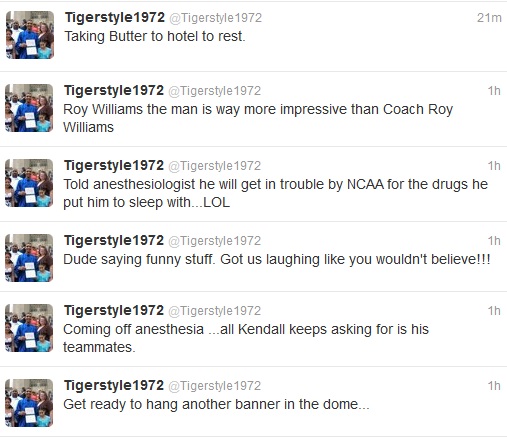 Based on the way Roy Williams handles these types of decisions it is likely he will defer to the doctors first and if they give the okay then he will leave the decision up to Marshall and the family to make. If Marshall and his family say they want him to play then Roy still may veto it if he thinks his point guard cannot play effectively. This was the case with John Henson who Roy thought was not able to do as much as he normally did prior to the game versus Vermont so Henson didn't play. This could be the same scenario though one notable difference is Marshall's long term career is a part of the equation, more so than it was for Henson whose injury was not nearly as severe.

According to friend of the blog and solid source @TarHeelWire, Marshall is NOT expected to play on Friday. Take it for what its worth and as Dennis Marshall said hold onto to something.

NOTE:A major typo above. I left the NOT out because I read the freaking tweet wrong. My apologies.