Was Wragge's Foul on Marshall a Dirty Play?

Share All sharing options for: Was Wragge's Foul on Marshall a Dirty Play?

With Kendall Marshall getting surgery this morning to place a screw in the broken scaphoid bone of his right wrist, the question as to whether the play that ultimately injured him was dirty or not naturally comes up. Before getting into the play itself, it is important to understand some context because it is a factor in how tinted our glasses are. There were two plays of a physical nature in the first half which have set the stage for the belief that Creighton was playing "dirty" basketball.

At the 13:44 mark of the first half, John Henson had the ball beneath the basket and was fouled by Creighton's Ethan Wragge. During the scrum Wragge's teammate Grant Gibbs made two swipes which made contact with Henson's injured left wrist. Henson took exception to Grant doing so and stepped up in his face drawing a technical foul from the officials. Following the technical being called, Gibbs is seen winking at his own bench as if to say what he had done was in some way intentional.

Only Gibbs knows what he was really up to there and since Henson was holding the ball down around his waist, it can be argue Gibbs was swiping at the ball and just happen to hit Henson's wrist. Whatever the actual intention, perception is reality. Roy Williams and Kendall Marshall were both seen at different points addressing the concern that Gibbs had gone after Henson's wrist but it is unclear if the officials addressed it in any way with Creighton head coach Greg McDermott or warned Gibbs. In addition to that play, Creighton had decided to play very physical basketball with UNC which is fine and expected based on past scouting reports that say Tyler Zeller and John Henson should be jostled. UNC has come to expect physical play from teams and in a game officiated by Big East/Big Ten referees, "letting them play" will be the rule of the day.

That being said, under what rules of basketball and the laws of the state of North Carolina, is this allowed?

Apparently for the officials in this game, this was a legal play since no one opted to blow the whistle. Zeller gets a full blown, two-handed shove to his face. If you do that in football, it s a 15-yard penalty for grabbing the face mask. For these officials it is "letting them play." To be fair, it was tweeted by a member of the media that Zeller had pushed Greg Echenique in the back on the other end prior to this. I did look at that on DVR and while there is jostling on the other end with Zeller getting his hands in Echenique's back it wasn't egregious and Echenique was working for position. In this case Echenique turns, hits Zeller in the face then looks back for the rebound on the shot. Why it wasn't called is a question someone in the NCAA ought to answer because had it been then subsequently reviewed Echenique would have been hit with a flagrant.

At this point you have two incidents. One is more of a perception while the other is an out-and-out dirty play. That makes discerning what happens on the play where Marshall injures his wrist tougher because obviously we have our viewpoint clouded with emotion.  To set the scene Marshall comes down on the break and goes up for a layup with Wragge defending. Wragge fouls Marshall who falls to the ground and while doing so puts his right hand down to cushion his fall which results in the broken wrist.

The video doesn't tell us much because Wragge's right arm is obscured. However two photos from the News and Observer's Robert Willet fill in the rest of the details. 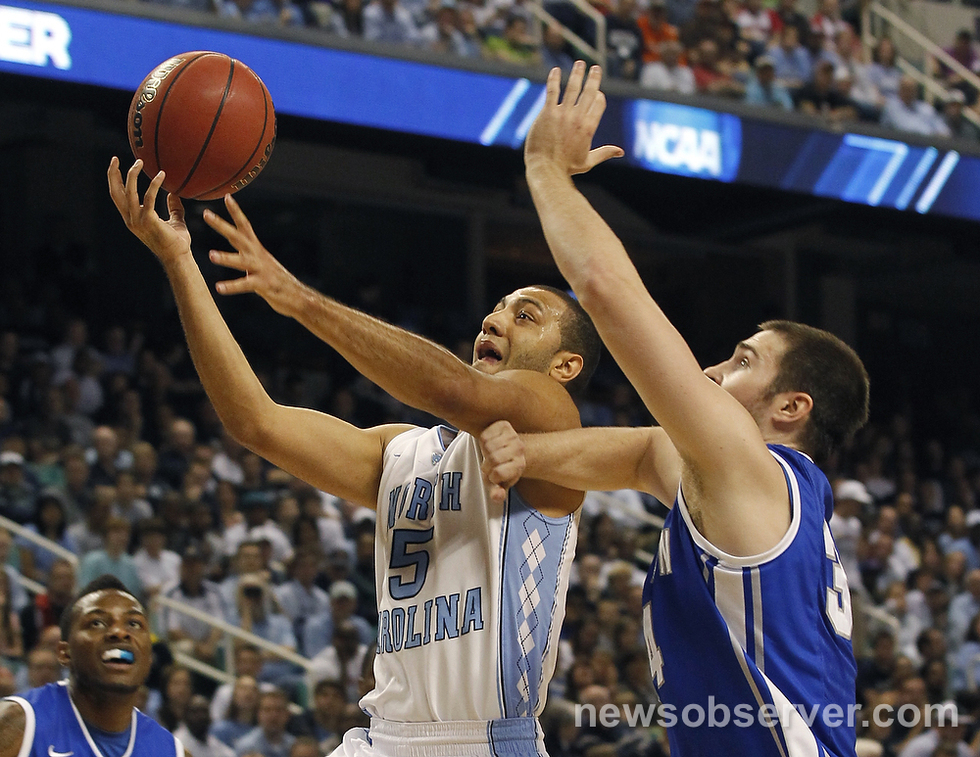 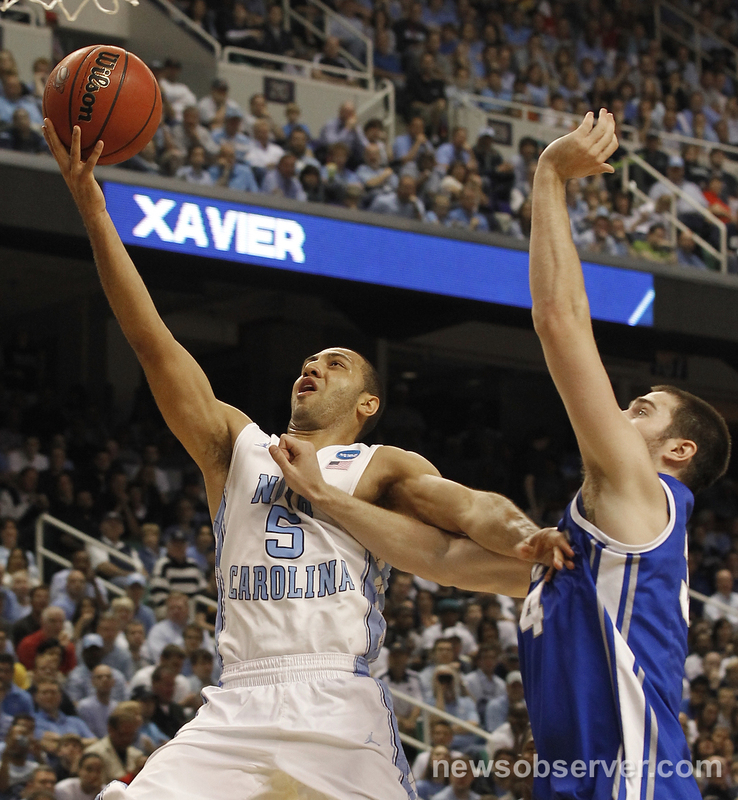 We can clear up one point right away and that is Wragge was making a play in the ball. He has his left hand up in an effort to contest the shot. The problem is his right arm which is the first picture is clearly pushing on Marshall. In the second frame Marshall is pushing back but it was that part of the exchange that caused Marshall to lose his balance in the air and land awkwardly enough to break his wrist. The question arises if what Wragge did dirty or excessive? On the surface probably not. In fact this sort of play happens all the time. Offensive and defensive players both use off hands to push an opposing player whether it be to get by on a drive or on defense force an offensive player away from the basket. In this case Wragge is going what you do when a player is attempting to go in for a layup which is make a play on the ball but get your off-hand on them to force them away from the basket. It does not appear Wragge was excessive with the push nor was pushing Marshall his first intention.

In short, I don't think Wragge was being malicious here(unlike his teammates apparently.) It was a hard foul but Wragge is still looking toward the ball and making a play on the ball. The refs made the right call since it is indeed a foul to push an opposing player with his off-hand. The previous plays in this game add an emotional charge to how we might view this play but I am not inclined to hold Wragge guilty of anything excessive here because had Marshall not broken his wrist we probably wouldn't be talking about. The unfortunate thing for Marshall and UNC is he landed awkwardly and broke a bone in his wrist. It was just a tough break(no pun intended) for the Heels and is the second time in as many weeks a player has been injured this way.

At this point the only way you can really look at it is either UNC winning the title was simply not meant to be or we are about to watch something epic. Only time will tell which it is.