UNC had four players taken in the first round of 2012 NBA Draft on Thursday night marking the second time in school history that has happened. Three of those picks came in the lottery and four in the top seventeen.

Harrison Barnes was the first Tar Heel taken at #7 overall by Golden State. It was initially believed Barnes in the top 5 but with Kentucky's Michael-Kidd Gilchrist going to Charlotte at #2 and Florida's Bradley Beal at #3 to Washington, Cleveland surprised everyone by taking Syracuse's Dion Waiters at #4. That left Sacramento taking Kansas' Thomas Robinson at #5. Portland had already locked in on Weber State's Daman Lliard leaving Barnes for Golden State to pick up.

After the Barnes pick, it was assumed John Henson and Tyler Zeller would be picked in short order but that did not happen. Kendall Marshall, who was not invited to the draft, was taken 13th overall by Phoenix to be the presumed heir to Steve Nash there. Marshall was thought to be slipping as far as 20th. Phoenix clearly loved what they saw and went for Marshall at #13.

John Henson followed right after Marshall going #14 to Milwaukee. Henson had originally been slotted as going to Detroit at #9 by many mock drafts but as the night unfolded Henson slid to the last pick in the lottery.

That left Tyler Zeller who was being touted as possibly the best or most productive of the four players UNC had in this draft. Philadelphia passed on Zeller since the Sixers didn't really need help on the interior. Houston surprisingly did the same going with Iowa State's Royce White at #16. Zeller's wait ended with the 17th pick to Dallas and was promptly traded to Cleveland for the Cavaliers remaining three draft picks.

Overall, it appears all four players found good landing spots where they will see playing time and can help those teams right away. Depending on whether or not Steve Nash re-signs with Phoenix, Marshall good either have some time to develop or be thrown into the mix right away. Zeller, Henson and Barnes all will be expected to step up right away. In Zeller's case he will be playing with Duke's Kyrie Irving which is a great situation. Barnes will be alongside Davidson's Stephen Curry. Milwaukee was looking for interior help and got it with Henson.

Roy Williams did make the trip to New York after saying he didn't know if he would. 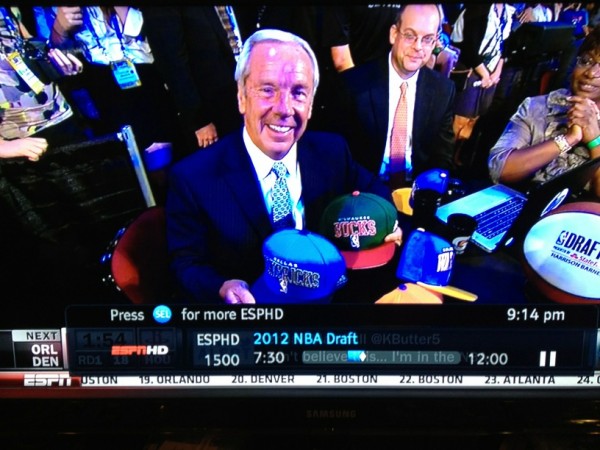 With four players selected, being seen at the NBA Draft is a nice boon on the recruiting side. Additional note: Roy has produced 23 first round picks(10 at Kansas and 13 at UNC) in his career. Dean Smith had 24 and Mike Krzyzewski is now the leader with 25. However, Roy has done so in 12 fewer years then both of Dean and Krzyzewski.

UNC and Kentucky tied with four first round picks each. Duke had two making it six total for the ACC.