Not Sure About The Rest of J.P. Tokoto's Game But His Dunks Are Absolutely Filthy

Share All sharing options for: Not Sure About The Rest of J.P. Tokoto's Game But His Dunks Are Absolutely Filthy

A few highlights from UNC freshman J.P. Tokoto who came in with a reputation of being a high flying dunker. He did not disappoint in his first appearance at the NC Pro-Am(video courtesy WRAL.com.) 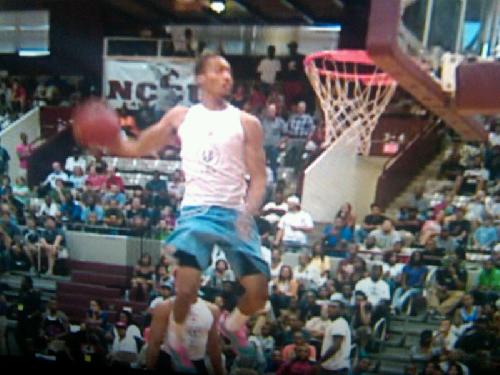 Inside Carolina also has highlights here.

Tokoto finished with 19 points(8-12 shooting) and hit his only three point attempt before leaving the game after rolling his ankle. All reports on Twitter from the local assembled media indicate Tokoto was fine and was icing the ankle as a precaution.

It is clear Tokoto is a freak athlete to the point he is drawing comparisons to Vince Carter in respect to leaping and dunking ability. For the time being that is far as the comparison should go. The freshman from Wisconsin has much to prove as far as other aspects of his game, especially as a shooter.